Hi there and welcome back. I hope everyone is staying safe and practicing social distancing! What a mess this all is. With this entry, I am providing you with some television and musical avenues to help keep you sane and pass the time.

Quite simply, You is Dexter on White Claw.  Both shows feature handsome and charming leads who are serial killers with hearts of gold. The difference is that Dexter Morgan, by his own twisted logic, made the world a better place because his victims were often, but not always, criminals. In You, Joe Goldberg (Penn Badgley) makes the world a worse place, even if he is well intended.

However, as my wise wife often says to me, “Just let TV be TV!”, and in no instance has this been any more true than with You. You isn’t meant to be deep or layered, because well, there is no nice way to say this; You started as a Lifetime Original series (before transitioning to Netflix). You knows its limitations and is meant to be lightweight, trashy fun.

And this is exactly why You succeeds – it knows what it is and knows its limitations. You is one of those binge worthy guilty pleasures that the viewer can burn through in a weekend and use to take their mind of more pressing matters; like how bat shit crazy the world is now. Based on the eponymous book by Stephen King, The Outsider initially looked like a crime drama along the lines of True Detective. I believed this HBO original would be King’s foray into true crime dramas. Instead, the series (which could have been eight episodes instead of ten) by the end, was a full blown supernatural thriller.

In a nutshell, a murder hungry monster, who has the capabilities to become a human doppelganger, is on the loose. Murder suspects appear in two places at the same time and detective Ralph Anderson (Ben Mendelshon), who has recently lost his own child, is tasked with stopping the rampage.

The Outsider‘s biggest and brightest star is singer/actress Cynthia Erivo, who plays Holly Gibney, a socially awkward investigator who helps break the case open. Previous to The Outsider, I was unfamiliar with Erivo’s work, and am now going to watch her in everything available. She has won a Tony and Grammy (The Color Purple), was nominated for an Oscar (Harriet), and I wouldn’t be surprised if she wins an Emmy for this role.

The Outsider succeeds as much as it fails, has an outstanding cast, and is largely well done. However, it never completely ‘clicks’ and would probably have benefited from being eight episodes as opposed to ten. If you like Stephen King you will like The Outsider, but if you are looking for something more or different, you may be indifferent, like I found myself to be.

Admittedly, I may be biased because Megan and I danced to Bridges at our wedding, but I really believe that the guy can do anything. He is a musical chameleon and can roll with the punches. No where is this more evident than with his recent collaboration with pysch/rock/funk/soul trio Khruangbin.

This EP blends just about a little of everything and the listener is richer for these artists’ shared efforts. On a recent trip back from Indiana, I listened to this EP for almost two straight hours and discover something new on every listen. Funk and soul? Check. Old school country? Done. Psychedelic vibes? Keep ’em coming.

Bridges’ transition from Sam Cooke sound to respected artist and visionary is set in stone with this EP. I hope that this effort soon leads to a full album with Khruangbin.  Give Texas Sun a listen ASAP, partner. 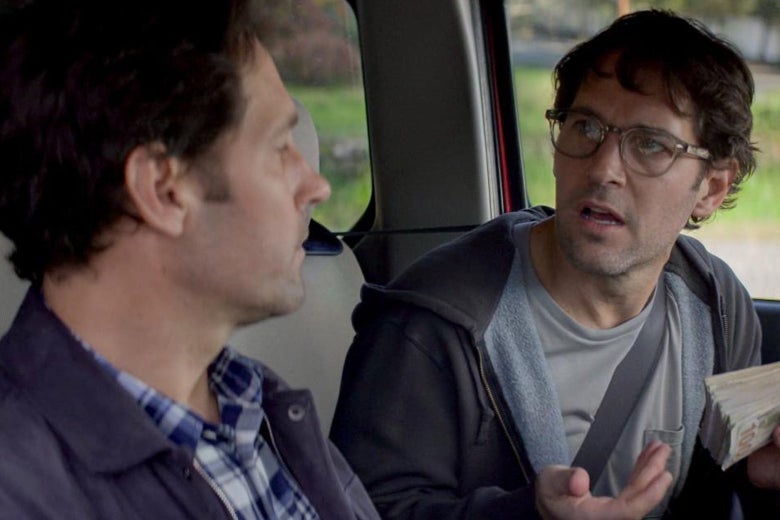 Everyone loves Paul Rudd. He genuinely seems like a good dude, is as talented as they come and has legitimate acting chops. However, the Netflix original Living With Yourself is a rare Rudd miss.

Quick Synopsis: Rudd plays Miles Elliot, a copywriter who has lost his lust for life. His job is a dead end, he and his wife are having trouble conceiving, and their suburb McMansion has turned into a prison. However, a coworker has a tip for Miles to help him get back to his old self: a sketchy and mysterious strip mall clinic that is a fountain of youth and vigor.

This should work, right? Well, it doesn’t. While Rudd has great chemistry with himself, he doesn’t really have any chemistry with onscreen wife, Aisling Bea. It is hard to believe that they were ever married in the first place, even with the assistance and flashback to when they were young and in love.

The moments that were supposed to be suspenseful were not, the funny lines didn’t quite stick, and by the end of the predictable ending, I really wasn’t emotionally invested in these characters or how their story ended.

Living With Yourself would have worked better as a movie told in 120 minutes, than a series. Don’t get me wrong, Rudd is still capable and there are some clever moments, but even a Hail Mary cameo by Tom Brady himself can’t save this production.