I love the North End of Columbus and am proud of the fact that I lived in Clinton Estates for seven years. In fact, I consider the North End my Castle Black. Residents are friendly, neighbors pull up each others trash cans and the neighborhoods still have a familial vibe. Unfortunately, while living there, it was not uncommon to hear unfounded and snide comments and remarks about my neighborhood from suburban outsiders.

In the North, we refer to those outsiders as Lannisters. (That is a Game of Thrones reference, in case you are living under Casterly Rock).

Life in the North has been on the rise for more than a decade as crime is down, housing prices are up and the corporate restaurants that used to occupy 161 are out. The Olive Gardens, Max and Erma’s, Hooters and Texas Roadhouses have been replaced by smaller, family owned eateries that more often than not have an ethnic flair.

This ethnic food ally, ROUGHLY contained between Morse Road to Dublin Granville Road (south to north) and I-71 to Cleveland Avenue (west to east) offers Chinese, Japanese, Mexican, Brazilian, Peruvian, Tibetan, Indian, Italian, Vietnamese, Napali and African restaurants, just to name a few. Immigration has ALWAYS made this country better and the cultural and culinary diversity in the north corridor reflects this idea. Did you enjoy your day in America today? If so, thank the ancestral immigrant that brought your family here from somewhere else.

Located where I-71 meets 161, across from the former Otani (RIP) and next to the empty Giant Eagle, Helen’s Asian Kitchen is off the beaten path, quirky, unpretentious and a North End neighborhood favorite.

We decided to start off with a few dumpling appetizers, the first being the aptly named Spicy Dumplings.

Peanuts and green onions topped a spicy chili sauce which in turn topped delicious and fresh pork and cabbage dumplings. Our evening was off to a great start.

When those were finished, we treated ourselves to Xiao Long Bao.

Served with a rich sauce, these handmade dumplings also contained pork and cabbage, but took a little longer to reach the table as the buns are hand rolled and steamed. Our conclusion? These dumplings give Momo Ghar a run for their money and depending on your mood, may even be better. If you go to Helen’s make sure to get this dish, you won’t regret it. In fact, you should go to Helen’s specifically for this dish.

Even though it was his 40th Birthday dinner, Jack refrained from having a drink so Erika and I picked up his slack and ordered a few Tsingtaos.

If you are wondering about imbibing, Helen’s offers mid to high range spirits, craft cocktails, a wide variety of domestic bottles and a few imports.

Now that the appetizers were finished and the Chinese lagers were flowing, it was time for the entrees.

Since it is Jack’s birthday, we will dive into his entree first. 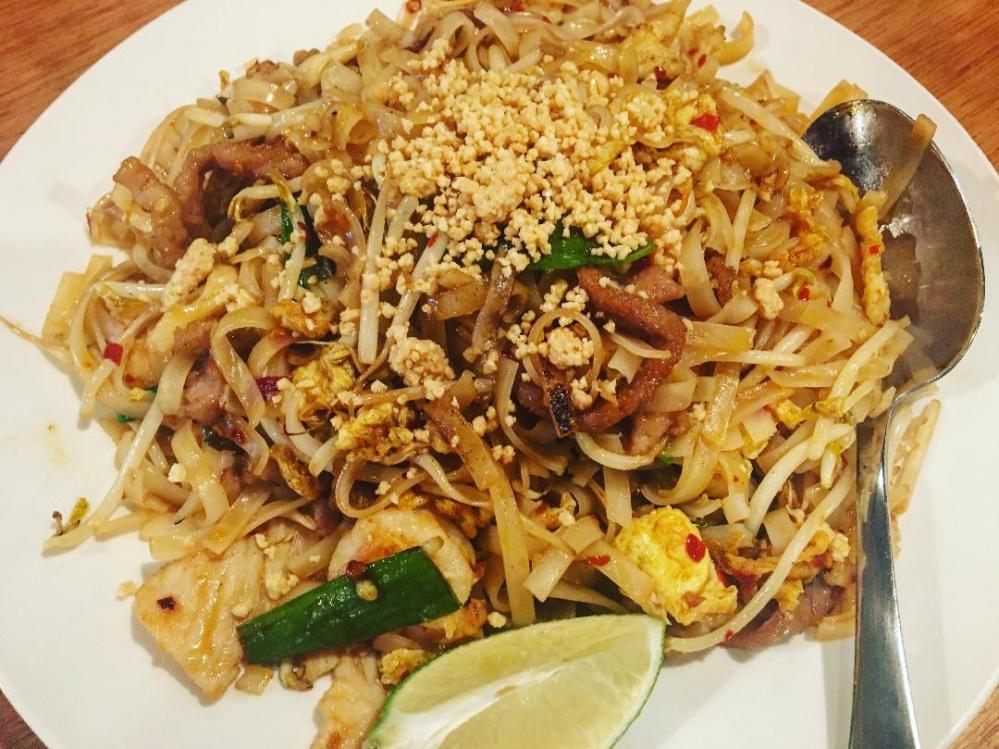 The  house Pad Thai contained chicken, beef and shrimp, shallots, chili pepper, peanuts and eggs over dried rice noodles. The fish oil based sauce was the perfect combination of sweet, salty and sour. The Pad Thai won first place in our group’s entree competition and as far as Columbus is concerned, is second only to the Pad Thai served on Bethel Road’s Bamboo Cafe.

Served with fried rice and containing beef, sprouts, onions and green onions and coated in a rich and salty sauce, this dish a great combination of flavor and texture. If you are trying to convince a picky eater (which Erika is NOT), tell them about this dish or even order it for them. If there happens to be leftovers (fat chance), you could easily reheat the dish the following day. Just use a pan and not a microwave, you savage.

This classic Chinese dish came with a side of steamed rice and contained spicy chicken, peanuts, green peppers and chili peppers. Another great choice, this dish seemed a little more sweet than spicy and could have used slightly more heat. Still, this is another choice that should make everyone at your table happy.

In the interest of maintaining my happy marriage, it should be noted that Megan has not said no to any ethnic food requests in a really long time. Also, I now take showers daily. A happy marriage is all about compromise.

The last dish of the evening? The Crispy Salt & Pepper Prawns.

This dish is exactly what it sounds like – gigantic and fried prawns that were crispy and salty with a hint of spice. No rice or vegetables are offered with this House Specialty, but the shrimp was piping hot and the batter complimented the spice well. When I return to Helen’s, I will make sure to order this as an appetizer for the table and not as my entree. You should probably take that advice.

At this point we couldn’t even consider dessert as we were all filled to the gills. My recommendation for a table of four?  Two appetizers (one being dumpling based), two traditional entrees and two adventurous entrees. Share ALL of it.

After dinner, we went for a night cap at Sequoia Lanes – a hidden gem in Forest Park that doubles as a bowling alley and a sand volleyball court. Sequoia is a culturally diverse environment that mirrors the neighborhood demographic, serves fun and funky house cocktails and is a PRIME destination for people watching.

So there you have it, a blue print for an awesome evening in Little Queens. Enjoy!

I am just a regular dude from the suburbs who likes to write. The topics usually focus on television, music, and food, but I also like to write about the community I live in. You can also check on the content by clicking on this link - https://614now.com/author/aaronwetli. As always, thanks for reading! View all posts by Aaron Wetli