Hello and welcome back! This entry will detail the first two days and nights of our trip to the Pacific Northwest, specifically in Seattle. We stayed directly next door to Pike Place Market and did fun, mindless tourist type activities…and we had a blast. You may want to put on some coffee, this is going to be another long entry.

After an early 6:30 am flight and an hour layover in Minneapolis, we arrived in Seattle roughly eight hours after leaving Columbus and I truly believe the worst part of our trip was the devil that is Seattle-Tacoma International Airport. I get it…Seattle is the New York of the PNW, but wow is that airport frustrating. Luckily Megan is a seasoned travel veteran and led the way. I am the muscle and she is the brains (at least when pertaining to travel).

One thing the Seattle airport has going for it? A convenient and inexpensive train ride to many downtown hot spots. For between $2 and $5, you get to ride train cars that are full of beefy, bald bo hunks (I am Hungarian so I can use that word) on the way to your desired stop. What a bargain! 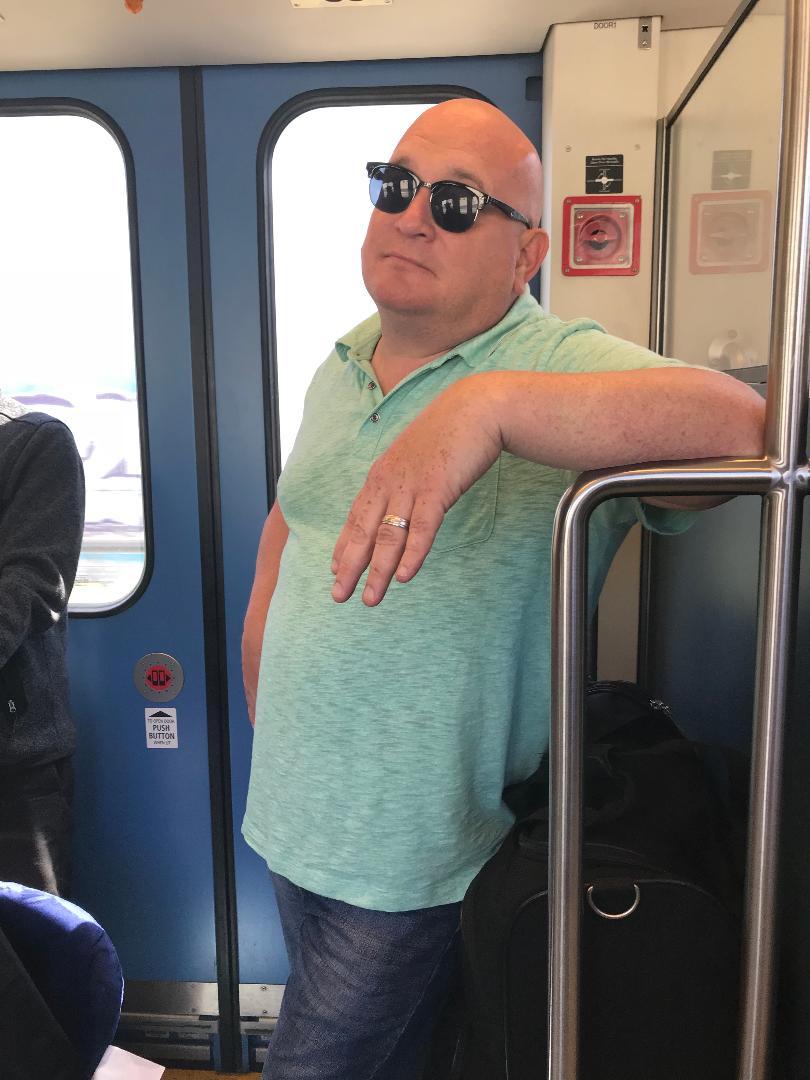 Eventually, we found our way to out hotel, which had a great view of the water and The Market.

After resting for a few moments, we went to The Market to get some lunch.

If you haven’t been to Pike’s Place Market, it is like Columbus’ North Market on steroids. Actually, the more that I think about it, The North Market is Bruce Banner and Pike’s is the incredible Hulk. You could literally spend a week eating, drinking and finding cool hidden gems in the many levels, hallways and passages inside.

Because we had been awake and traveling for almost 12 hours, we went back to our room to recharge before dinner. Eventually, we found our way to Cascina Spinasse, which ended up being the best restaurant experience we had the entire trip.

Serving family style, Northern Italian dishes, Spinasse serves incredible pasta with nuanced and flavorful sauces along with other assorted entrees and appetizers. We started with Prosciutto and Apples. 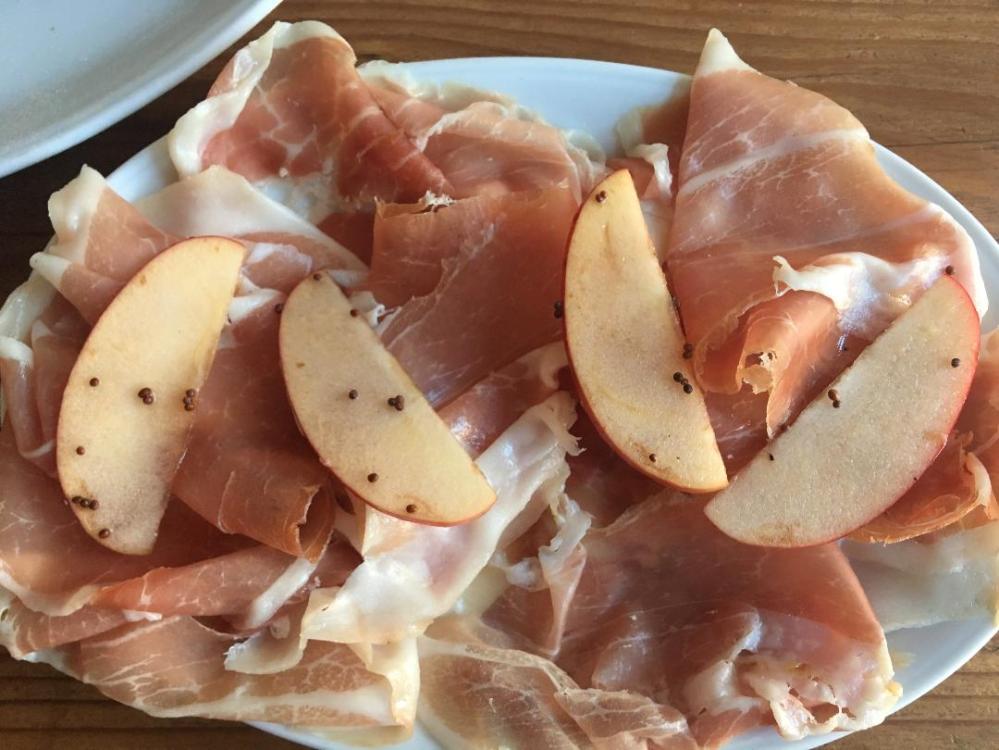 Fruit and ham is always a great combo, but this dish took it to another level. The PNW grows A LOT of fruit and that was reflected in the juicy and succulent apples that expertly complimented the near translucent and salty prosciutto.

Next, we decided to check out the family served pasta and ordered lamb filled agnolotti, served in a pork stock with butter.

Simple and silky smooth, the buttery pasta melted in your mouth, left you wanting more and was the best pasta dish I have had in recent memory.

The portion sizes were basically small plates, so we splurged and ordered another dish –  the Pappardelle con Ragu di Coniglio.

This rich and robust (without being overwhelming) was a house made pappardelle with a white ragu featuring rabbit. In Central Ohio restaurants, other than your uncle’s house, you don’t see rabbit a lot, so I am glad we took a chance.

At this point, we decided that we each had a few more bites of pasta left in us, and you would too if you were there. Stop judging.

Next up? The house special Tarajin con Burro e Salvia.

The title is a fancy way of saying thin, hand cut noodles in butter and sage. Low key, simple, rich and fresh, no portion of this entree was prepped before we ordered and I could have eaten two more servings myself.

If you look at the photo closely, you can see the fork prongs and use them for scale. If anyone in Columbus knows of an Italian Restaurant with small plates, please let me know!

After dinner, we walked into adjacent bar Artusi for a night cap.  Artusi is the Vino Vino to Spinasse’s Figlio and we enjoyed a drink with friendly locals and got some good tips for the rest of the trip. Day #1 was a success.

Communication is important, whether between spouses, friends or co-workers. Another important communication arena is the information transacted between locals and tourists.

Basically, I was under the impression that Seattle had a Michelin rated restaurant, specializing in Asian dumplings, located only four blocks from our hotel. The locals reported that dumplings were amazing and instructed us to get to Din Tai Fung very early, or be forced to wait in line for hours.

Megan was a good sport and we went out to find our delicious dumpling destination. Walking through the downtwon streets of Seattle, we were treated to the sounds of street musicians and works of multicultural art, but I couldn’t shake the feeling that something was off, especially after we walked into the Pacific Place Plaza – a small indoor mall located in the heart of the city.

We powered forward, but as we walked past a Macy’s, Wendy’s and Movie Theatre, something still wasn’t right. Eventually we found the restaurant, which was nowhere close to as busy as we were told it would be and because only bar staff seemed to be available, we went to the bar and ordered coffees and a Bloody Mary.

As it was already 1:30 PM in Ohio and because we had a long day of being tourists and walking planned, we decided to split Pork Pot Stickers and the world famous Shrimp and Pork steamed dumplings. 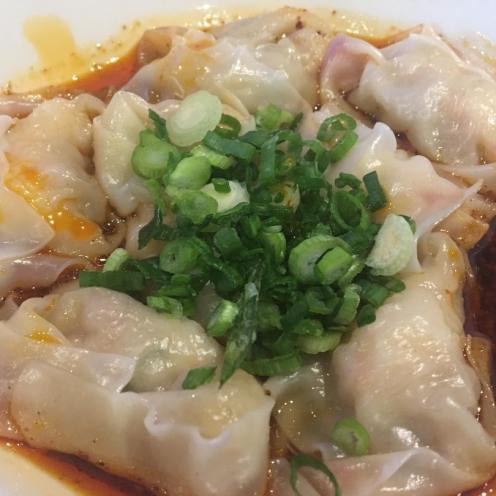 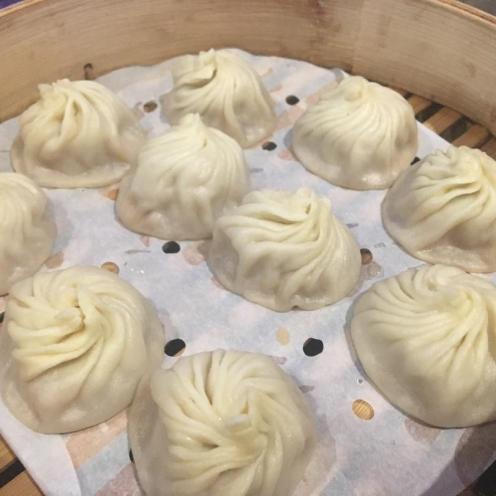 Our food came out almost immediately, but unfortunately was unremarkable. I truly believe that Columbus institution Momo Ghar offers similar products that are of a higher quality.

Although our experience was far from terrible, I was still  perplexed as to how a restaurant in a mall obtained a Michelin rating. Well, as it turns out, I am kind of a dummy and that Din Tai Fung has twelve West Coast locations, as well as locations in Japan, China, Singapore, Thailand, Indonesia, South Korea, Malaysia and Hong Kong, all of which sprung from the ORIGINAL Taiwan location…that just happens to be Michelin Rated.

Long story short, communicate clearly with the locals, do your research and never expect to find a Michelin Rated restaurant inside of a mall.

Next up on the docket? A trip to the Starbucks Reserve store. The Reserve Store is a huge warehouse style concept, where coffee is roasted, processed and served. The Reserve also has a large cafeteria and food menu (The Caprese Salad looked delicious) AND serves alcohol.  I decided on a Latte with Baileys and Megan chose a Gin & Tonic, which were both perfect for sipping and people watching. 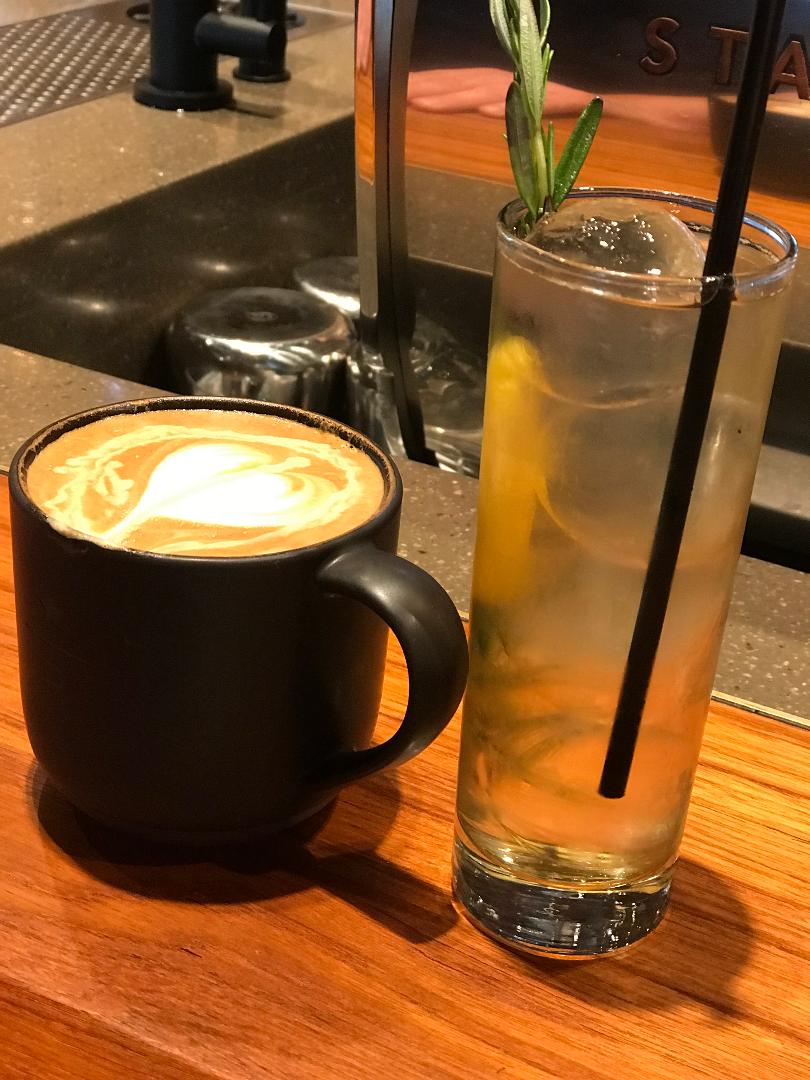 This was a good tourist type activity, is recommended for the coffee lover in your life and is a family friendly tourist destination. Speaking of being tourists, the next stop was The Space Needle and Chihuly Garden and Glass Home.

Located next to each other, you can purchase a combination ticket at for both at a significant discount. 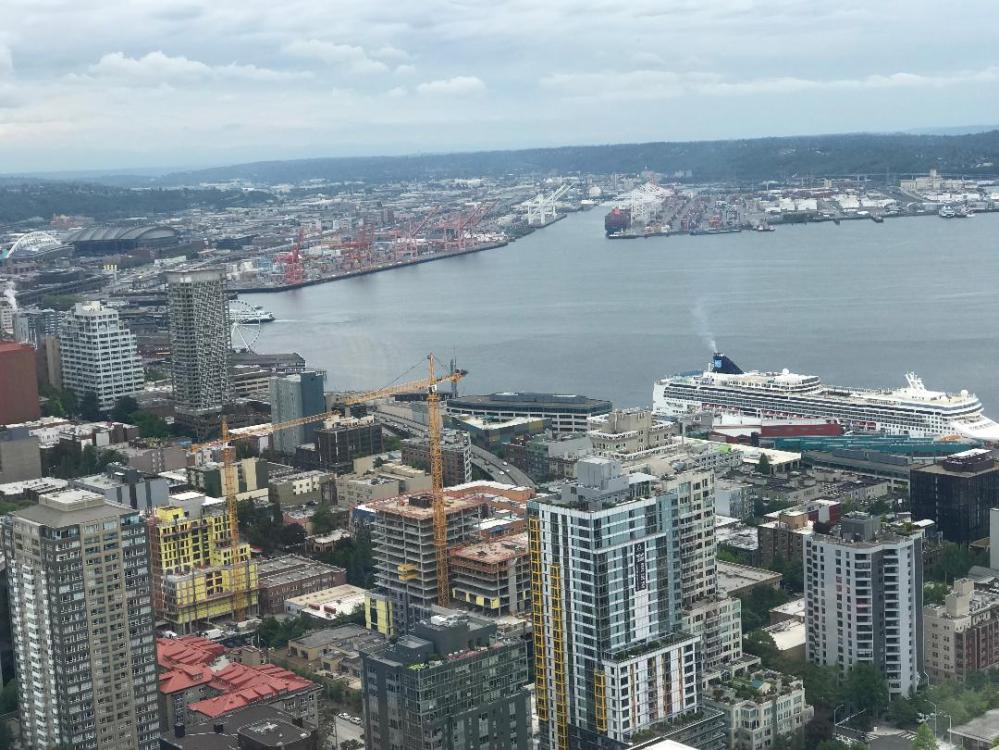 The view was great, but unfortunately the Space Needle was under construction and we had limited access to the building. Still we had fun and enjoyed the experience. 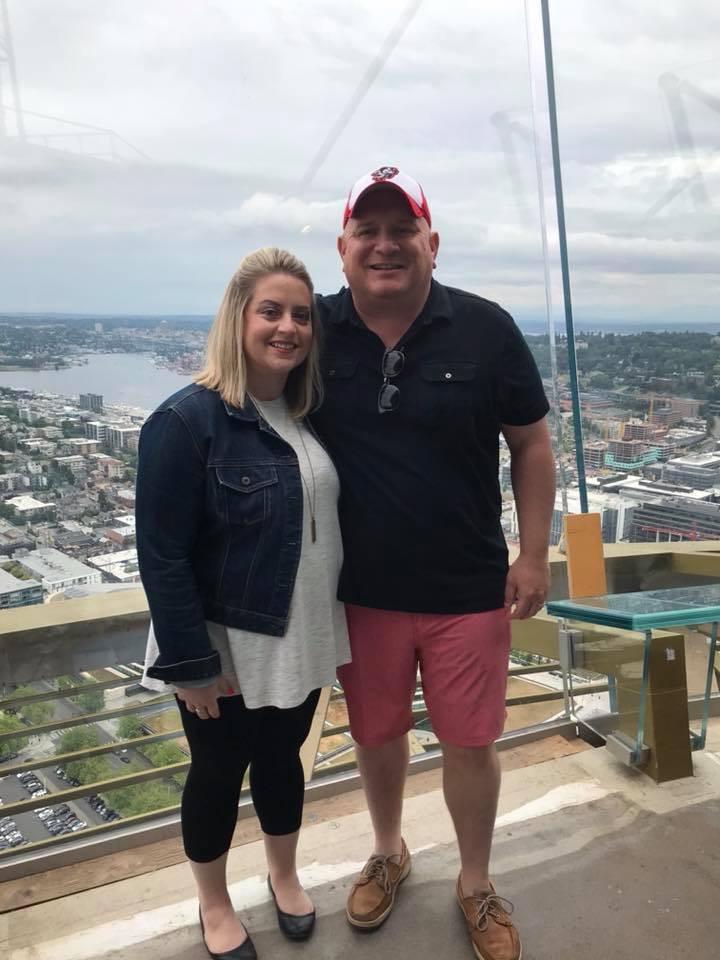 We ended up being much more interested in Chihuly than the Space Needle and if you are reading this, you would be too.

For those unfamiliar, Dale Chihuly is a Washington born artist (and John C. Reilly doppelganger) who specializes in glass sculpture.

Chihuly’s exhibits can be found all around the globe and if you have a few hours to spare and find yourself in Seattle, do yourself a favor and check out the Chihuly Garden and Glass Home. 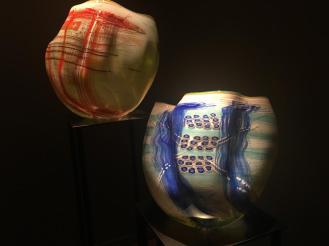 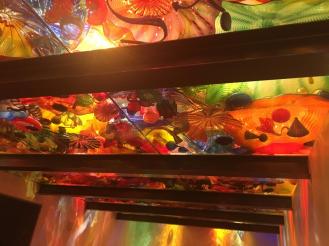 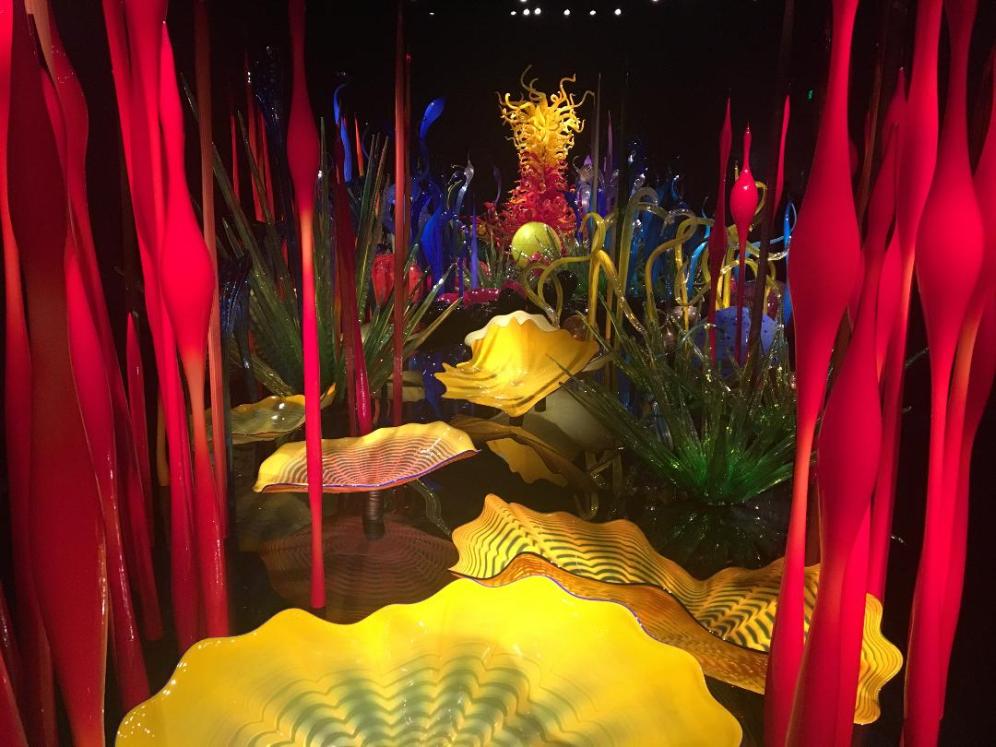 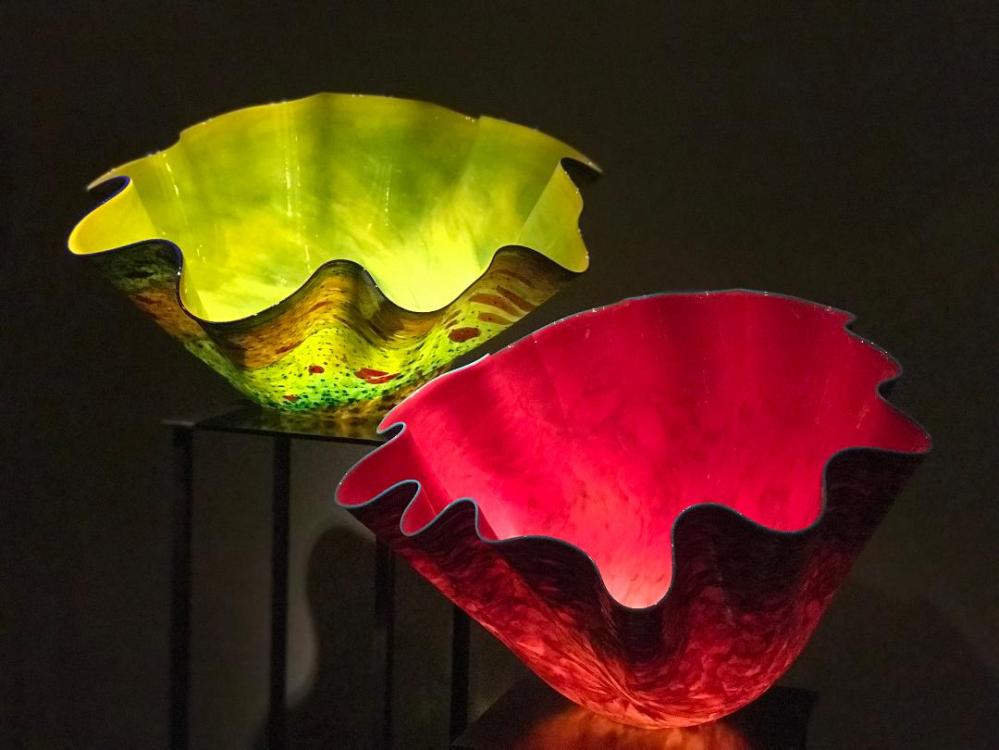 We spent roughly two hours walking around the inside and outside of the building marveling at his works and enjoying the scenery.

At this point, we decided to head back towards our hotel, check out more of The Market and get some lunch, which consisted of a chicken and a potato samosa. 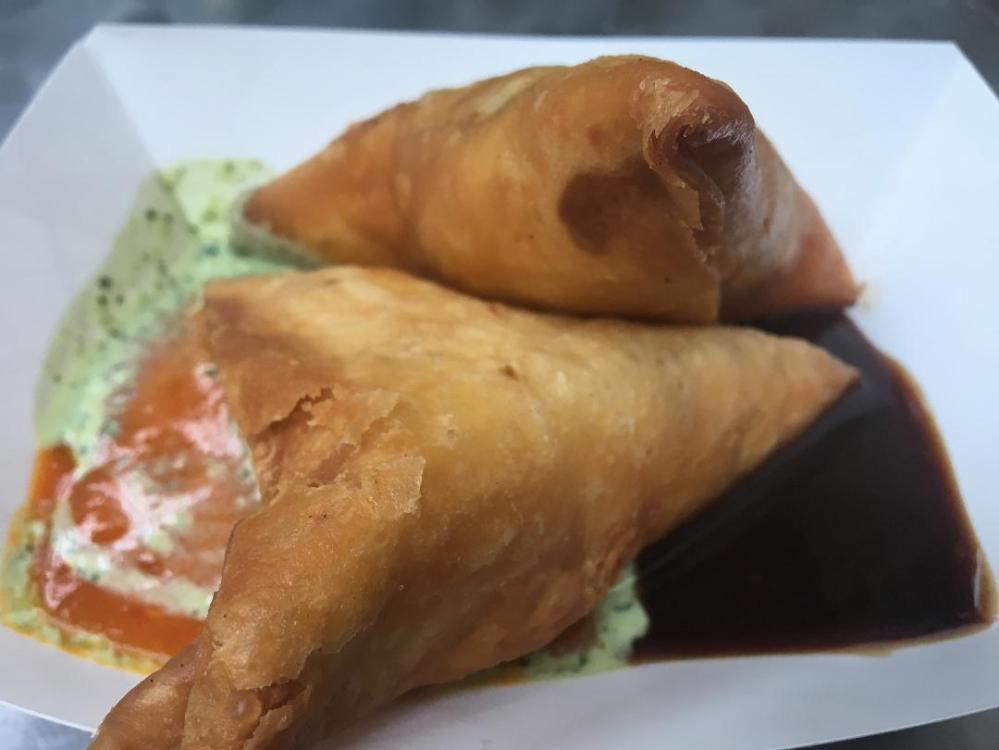 So, for Megan’s girlfriends and family who are keeping score, in the course of six hours Megan had dumplings, pot stickers and samosas AND went to a museum. Am I a GREAT influence or what?

The Market was packed on our Sunday afternoon, so we didn’t see any fish being thrown, but we did see a bunch of seafood, produce, restaurants and people. 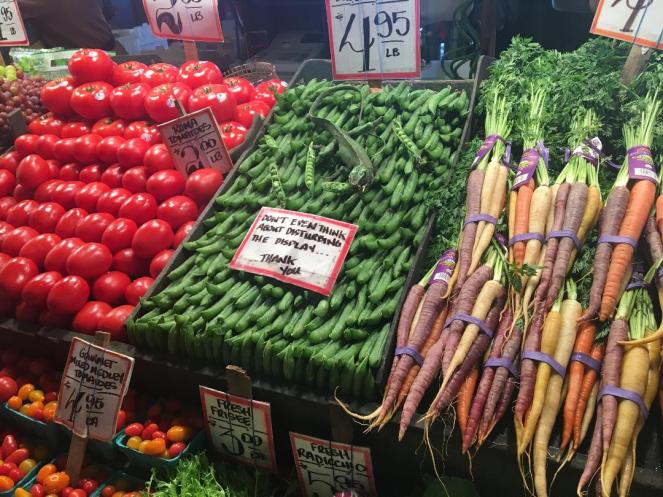 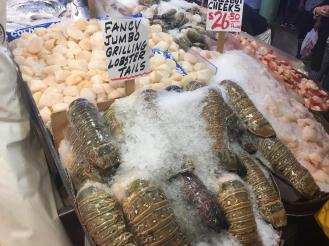 At this point, we decided to go back to our hotel rooftop and relax.

The view was incredible and recharged our batteries, so we left for dinner at The Pink Door, to celebrate our two year wedding anniversary.

The trapeze artist did five different 10 minute shows, complete with costume and music changes. The trapeze performer was a true artist, mesmerized the crowd and was perhaps the most muscular person I have ever seen. Seriously, she was ripped.

As far as dinner went, we ordered an anti pasto plate with bean paste, prosciutto, mozzarella and marinated peppers. It was certainly fancy…perhaps too fancy for our liking. #FirstWorldProblems

For dinner, I ordered a lamb plate (photo did not turn out) and Megan ordered clam linguine.

Megan certainly won this battle, not because my pick was bad, but because hers was so good. My tip for eating in the PNW? Order seafood for every meal.

As dinner concluded and we walked back to our hotel, we stopped for a nightcap at the White Horse Trading Company, a British style bar whose whole capacity is shown in the photo below.

We asked for a drink menu and the owner/bartender told us he only has ‘ale, whiskey and wine’. I ordered a whiskey on the rocks and was told rocks weren’t available and the wine Megan ordered was a chilled red. The environment was friendly and wonderfully bizarre and if I lived in that area, I would probably be a regular. Megan probably wouldn’t.

That wraps up our Seattle proper/tourist entry. If you have to be a tourist on vacation, Seattle is a great place to do it. Stay tuned for part three of our PNW vacation!

As always, thanks for reading!