Follow Netflix and Grill on WordPress.com
Posted on October 9, 2017October 10, 2017 by Aaron Wetli

Recently Megan and I and our friends Jenn, Mark, Leslie and Joe went to Hilton Head Island for a week of rest and relaxation. A few days before we left, news of Hurricane Irma was starting to surface on the news. We knew there was a chance that our trip might end early, but plans were made and work was taken off, so we rolled the dice and hit the road.

As the week progressed, there was a strange sense of calm among the locals and the weekenders both. The island was filled with an eeriness that I believe can only be experienced and not described. Bartenders discussed evacuation strategies and wait staff shared their stories along with the nightly specials. Tee times were kept, yards were mowed and roofs were shingled as business carried on as usual.

Towards the end of our stay, it was announced that a mandatory evacuation would happen on the day we were scheduled to leave. After much debating (sensibility prevailed 4-2) we decided to leave a day early as to miss traffic.

I want to make it clear that none of us were complaining (at least with the benefit of hindsight) and we realize that leaving a beach vacation a day early is a problem that many people would love to have. Hurricane Nate is settling into the Gulf Coast as I edit this entry and our hearts truly do go out to all of those affected by this hurricane season.

With all of that being said, here is a list of things to do in Hilton Head under the threat of mandatory evacuation.

This is the most glaringly obvious activity. The water is warm and clear, the sand is clean are the environment is neither a Spring Break destination nor a day care center. The environment hits that sweet spot in between and that made 6 DINKS (Disposable Income No Kids) very happy.

This is the way I prefer to chill at the beach because I am an American and I love this country.

The beach became less busy as more people left ahead of Irma. Our group took this opportunity to go to the beach and watch the sunrise. As you can tell, the ladies were more excited about this than the gents. 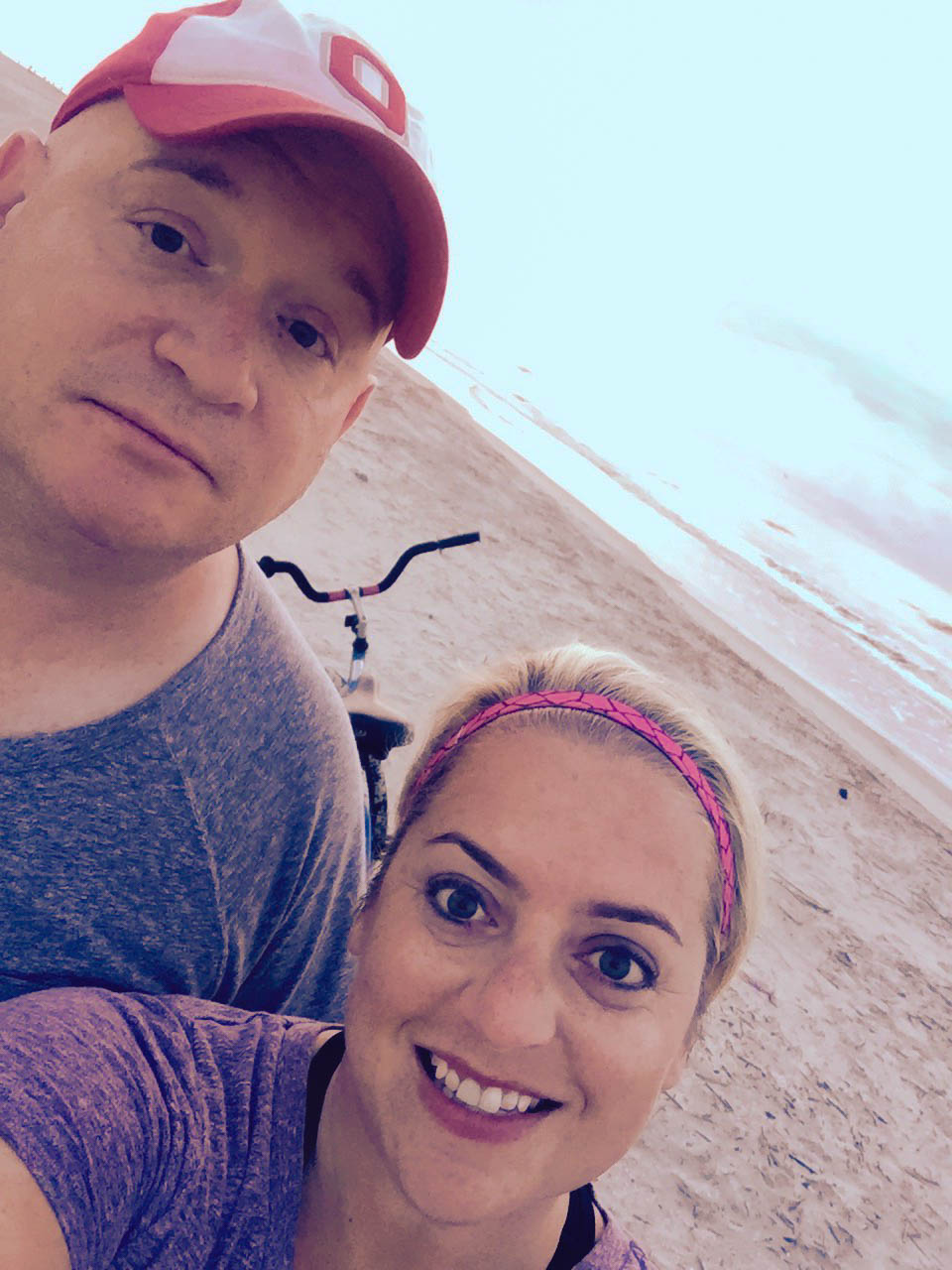 When we travel to Hilton Head, we stay in a part of town called The Shipyard. There are many perks to staying at The Shipyard, such as proximity to the beach, on site pools and being able to walk to Coligny Shopping Plaza.

Coligny is a shopping center that houses a grocery store, tourist shops, restaurants and bars. If you need ANYTHING for your beach vacation, this is the place to go. The Coligny restaurant that we choose to spend time in is the Frosty Frog Cafe.

The Frog is a Hilton Head institution, has a large outdoor patio, a bar and a dining area. The Frog also has higher quality bar food, but by no means is elitist. Most nights, you can find locals and weekenders watching the game at the bar.

On the first night of arrival in Hilton Head, our tradition is to hit the Frog, eat some pizza and decompress after a 12 hour drive.

Here is ‘ Joe-Joe’s Meatlover’ with pepperoni, bacon, ham and sausage. A steal at $20. 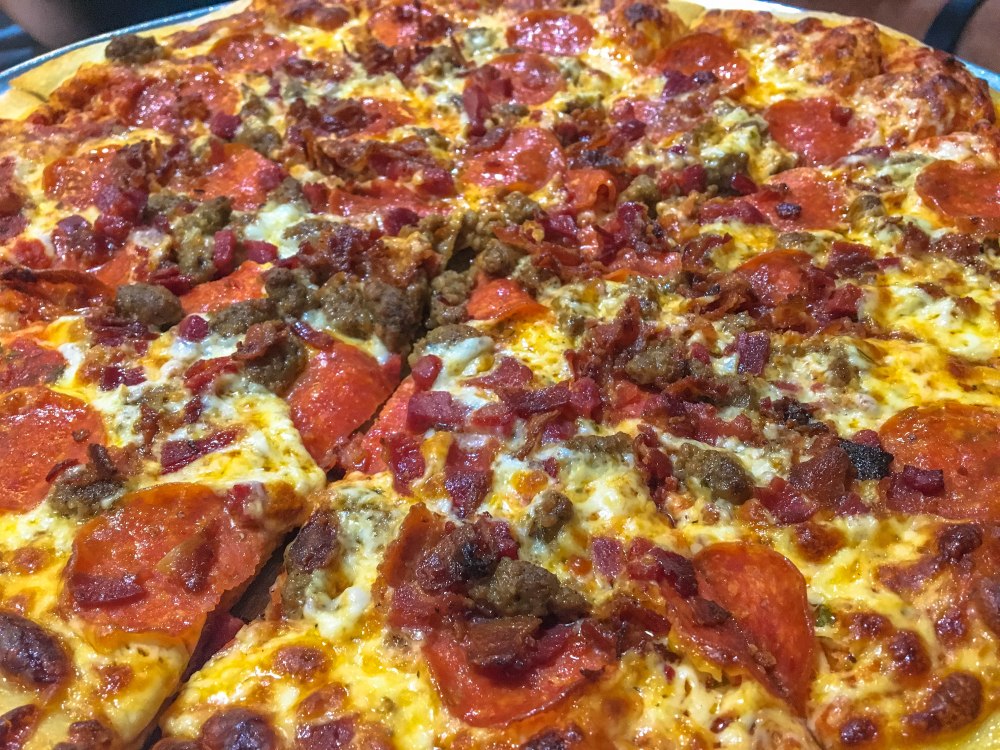 We also picked ‘Sandee’s Tree Hugger’ which is a white pizza with mushrooms, olive oil, tomatoes, garlic, spinach and olives. It was good as well, but I feel that pizzas in this model should be primarily kept to gourmet pizza shops.

We also decided to partake in some chicken wings. The wings were meaty and fresh and the best things on the menu. Well, at least the regular Hot was.

The Garlic Butter were stood out a little less, but still hit the spot. 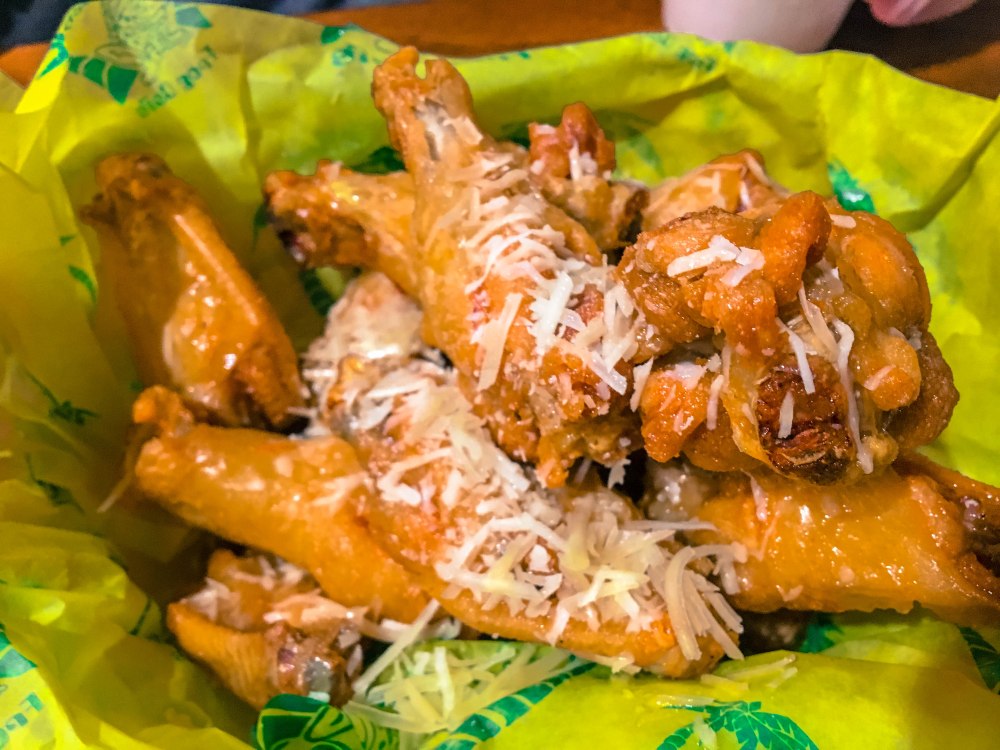 So, if you have been to the Frog you know that I am saving the best for last. The real reason to go the Frog is because of their amazing frozen daiquiri selection. 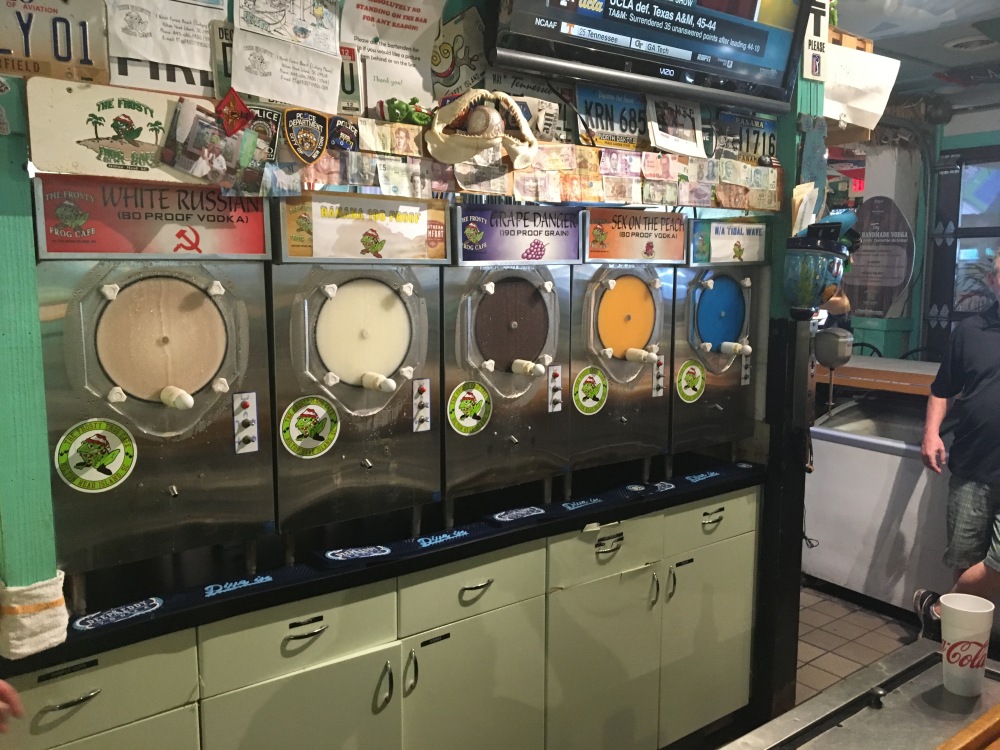 The Daiquiris come in 16, 24 and 32 ounce Styrofoam cups (which makes them beach/travel friendly) and are made with grain alcohol. If you hate yourself and make bad choices, you can add an extra ‘Frogger Shot’ of grain alcohol to your already horse-blinding drink for only $2.75. In the spirit of full disclosure I did exactly this on the last day of our trip.

My thought was to bike the travel friendly Creamsicle to our pool for a ‘vacation cap’. Luckily for my liver, I hit a bump and my drink flew over my handlebars and landed in a state of disrepair.

Our group ate at the Frog one more time for lunch after golfing, which transitions us into:

Yeah…golf is still a thing and golf still sucks. Our golfing opportunity did lead us to this great photo of Megan though.

And I got a chance to break in my new Koozie, so the day wasn’t a total loss. Thanks, James! 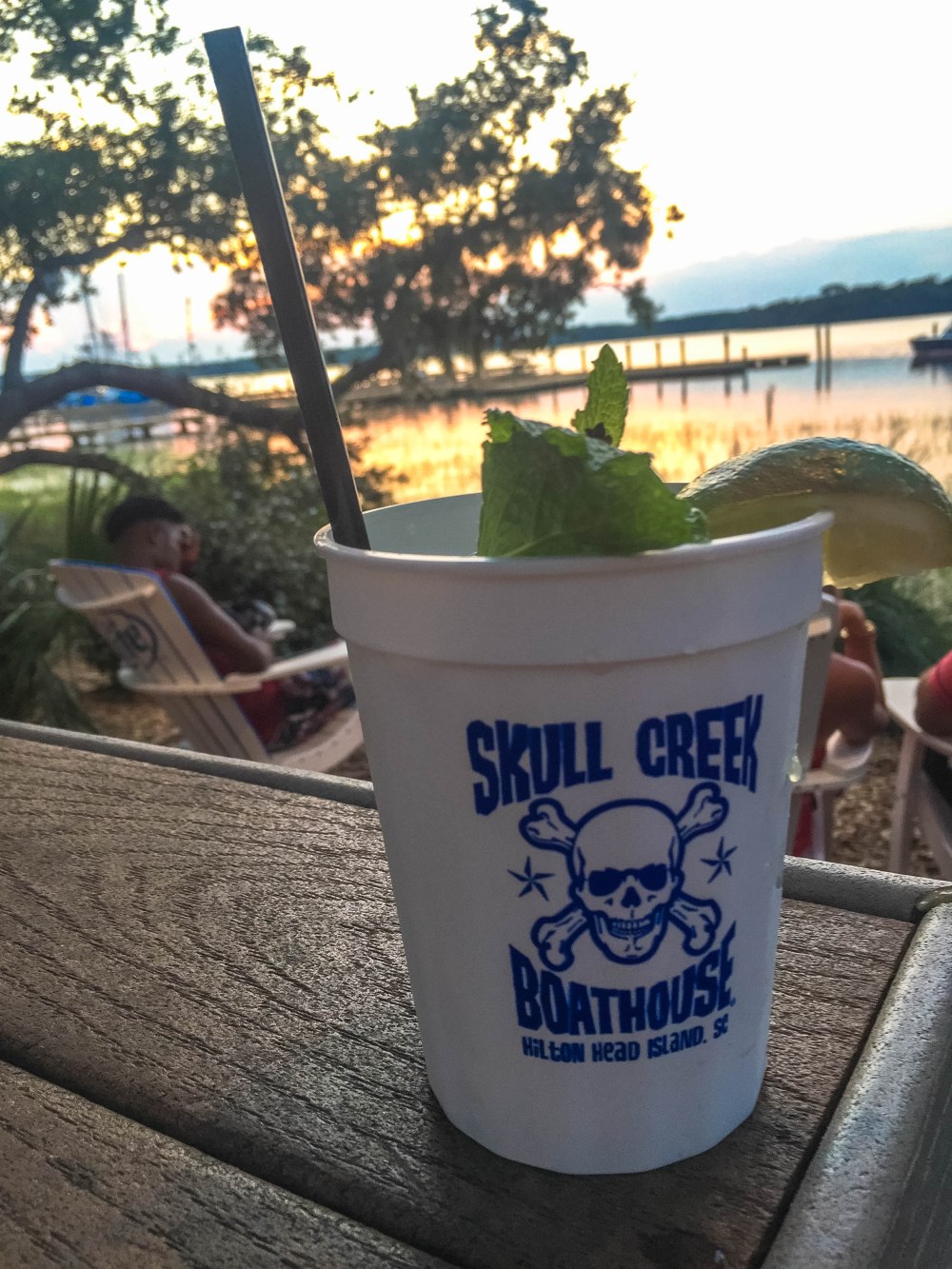 Skull Creak Boathouse is on the water, family friendly (like most everything in Hilton Head) and has indoor and outdoor dining areas. We decided to start with Latin Scallop Ceviche and ordered a Tuna Roll for the table.

The scallops were caught that motning and the complimented the tomato, avocado, cilantro and lime both in flavor and consistency.

The spicy tuna had a fried spring roll wrapper which added a nice crunch, bit ultimately felt like a bit of a gimmick.

For dinner I chose Shrimp and Grits and Megan ordered the Low Country Boil.

Neither of us were disappointed by our selections and appreciated the freshness of the locally caught seafood. In fact, everyone was happy with their dinner selections and a good time was had by all. If you find yourself in Hilton Head with a picky eater who doesn’t like seafood, Skull Creek Boathouse is a great place to take this poor soul and ease them into being a normal person. Baby Steps. 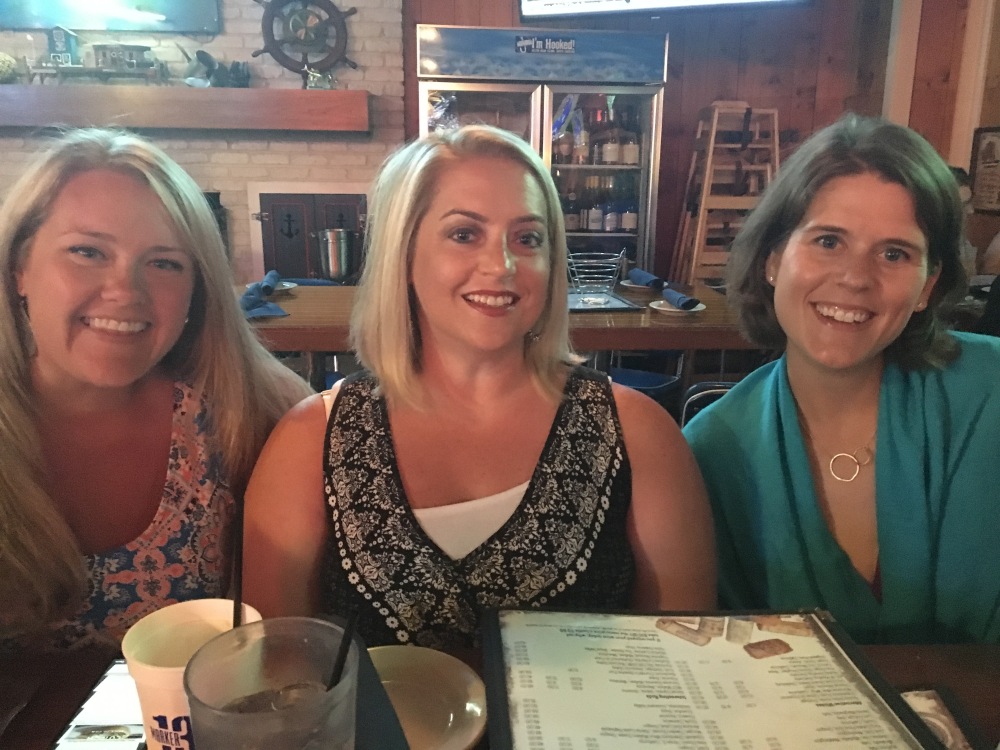 Like Freddy Mercury said, ‘I Want to Ride My Bicycle!’

Hilton Head really has a nice set up for safely and efficiently riding bikes. Companies will drop off bikes and locks to wherever you are staying and pick them up at the end of your trip. We ride our bikes whenever possible and never feel unsafe doing so. Everyone on the island is aware of the bicycles and (for the most part) drive appropriately.

After a long day at the beach, nothing is better than having an adult beverage in the shade at the pool. Relaxing in a chair or chilling in the water, this is always a nice way to decompress. A special thanks to Mark and Jenn for the personalized Koozies. You can’t spell class without Koozie. Well, you can but it’s not as cool.

Night Grilling is the best. 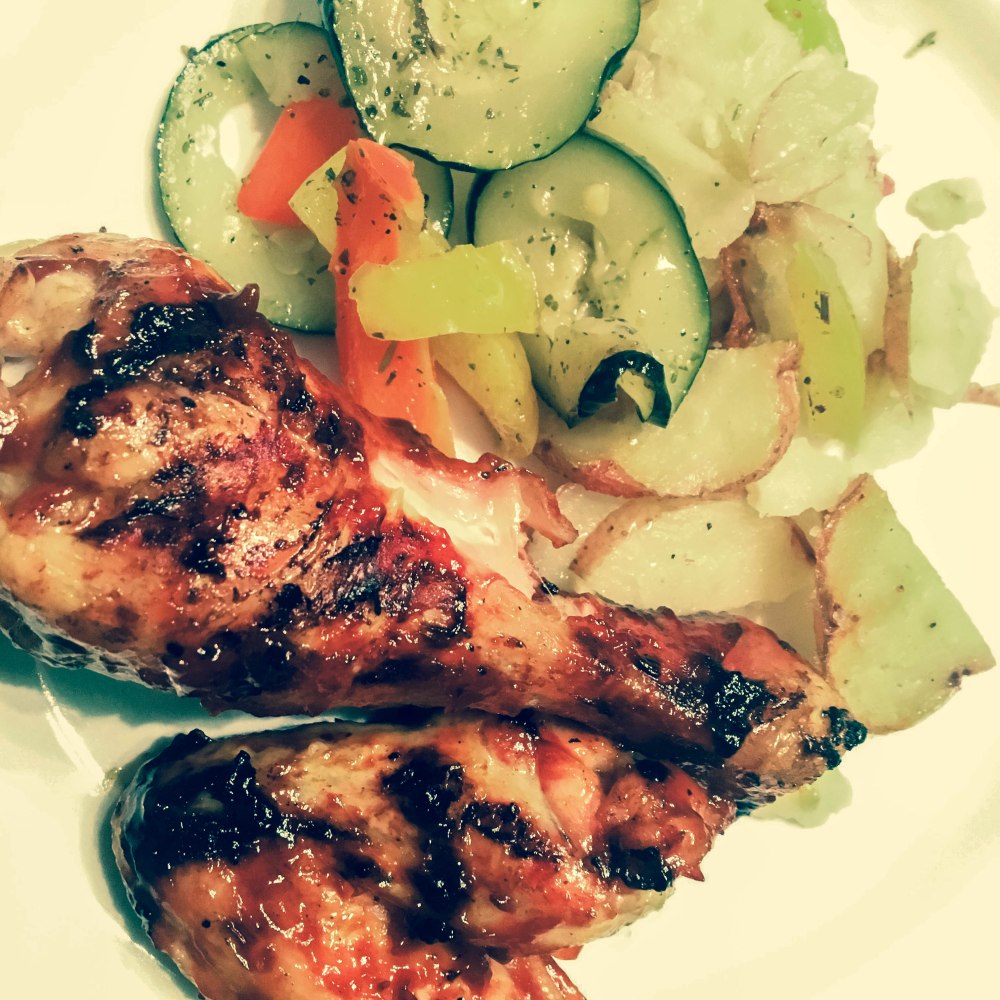 Megan made delicious French Toast and Sausage and Mark made some terrific brisket. 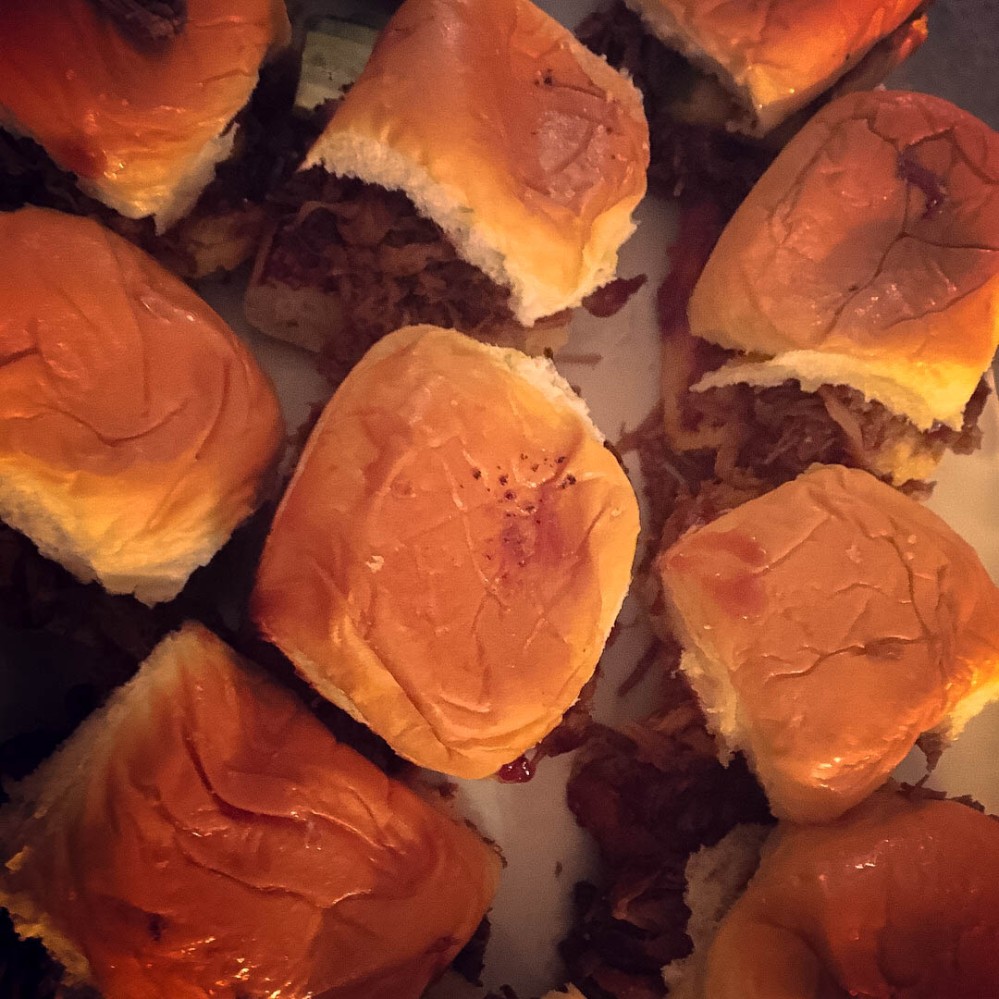 Ela’s is on the water, has a great view and the best food I have had (as of yet) on the island. Megan went to Ela’s for a nice dinner at her Bachelorette Party and wanted met see the restaurant.

We were seated at sunset and had a great view.

We ordered a bottle of Chalk Hill (California) Pinot Noir and soaked in the ambiance.

The Crab Stack appetizer was hearty and fresh and came with a creamy sauce.

I decided on the Malbec Braised Shirt Ribs with Grits and Asparagus. 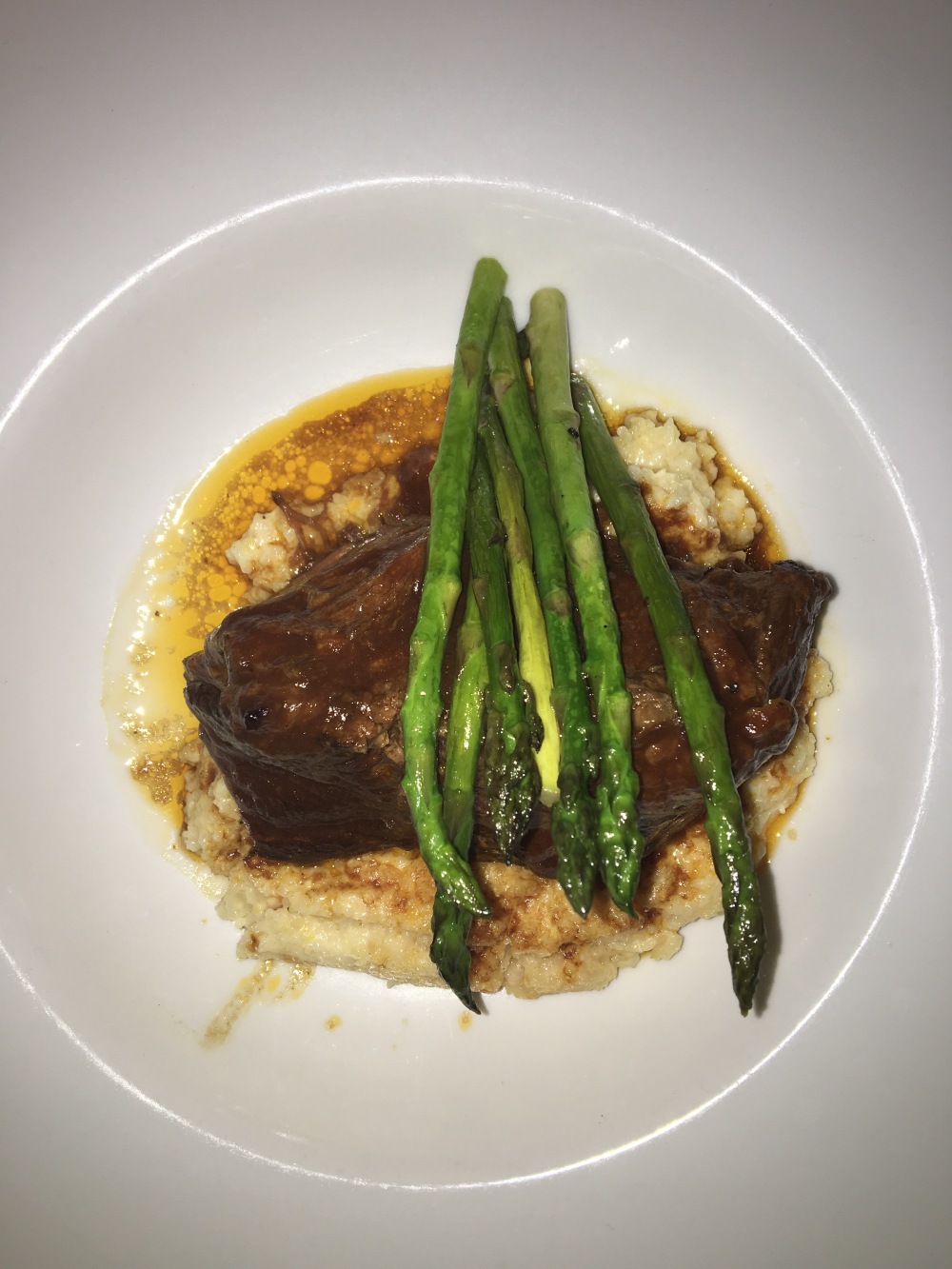 The short ribs were tender and juicy, the Grits were full of cheesy, buttery goodness and the asparagus was perfectly grilled. 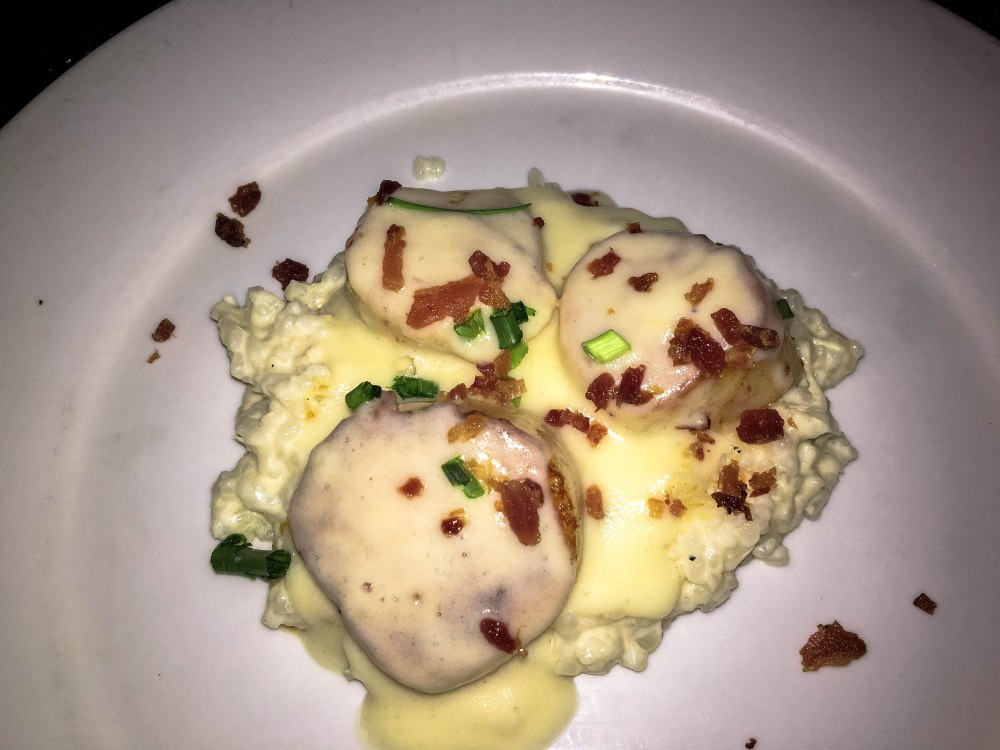 This dish was rich but not overwhelming. The risotto was thick but not filling and the pancetta added a crunch and flavor.

After dinner we walked to San Miguel’s and sat at their waterfront bar for a nightcap with the locals. Everyone was discussing their evacuation strategies and some of the local businesses decided to stay closed after that evening’s business hours. Everyone was really nice and we made friends with another Columbus couple. I also ordered another frozen drink.

Judge if you must, but judge Megan as she is the one drinking a Cab from a plastic cup. Some people you can’t take anywhere. 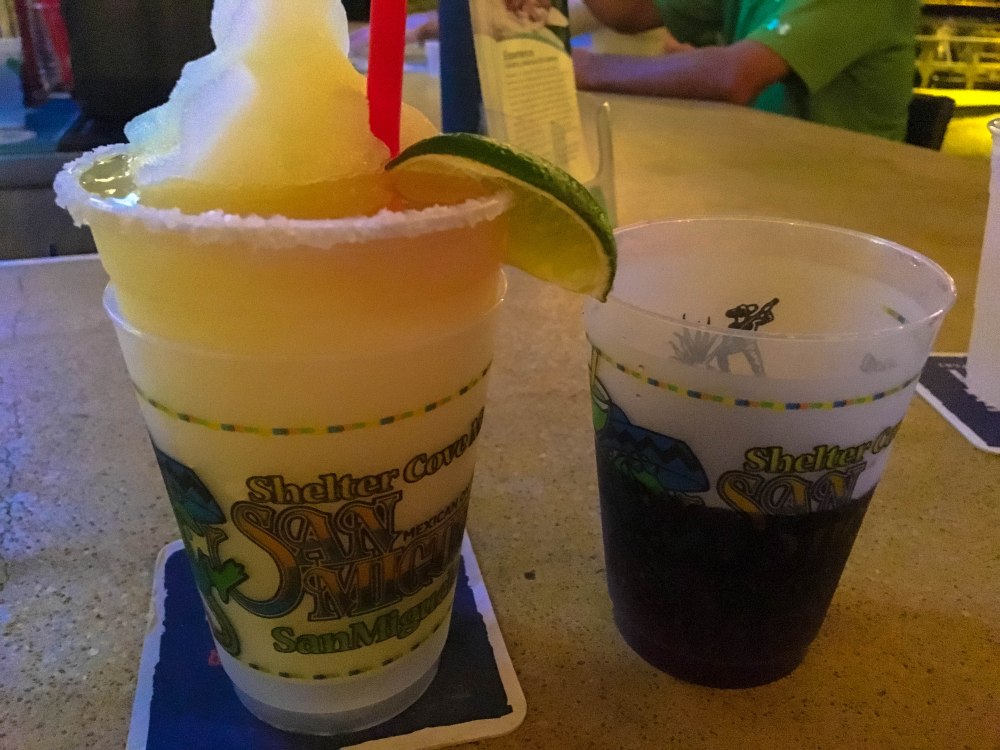 That is what we did! The beach was empty and business were starting to shutter their windows and doors. It wasn’t an apocalyptic feeling, but it was surreal and a little eerie. We took the opportunity to imbibe. 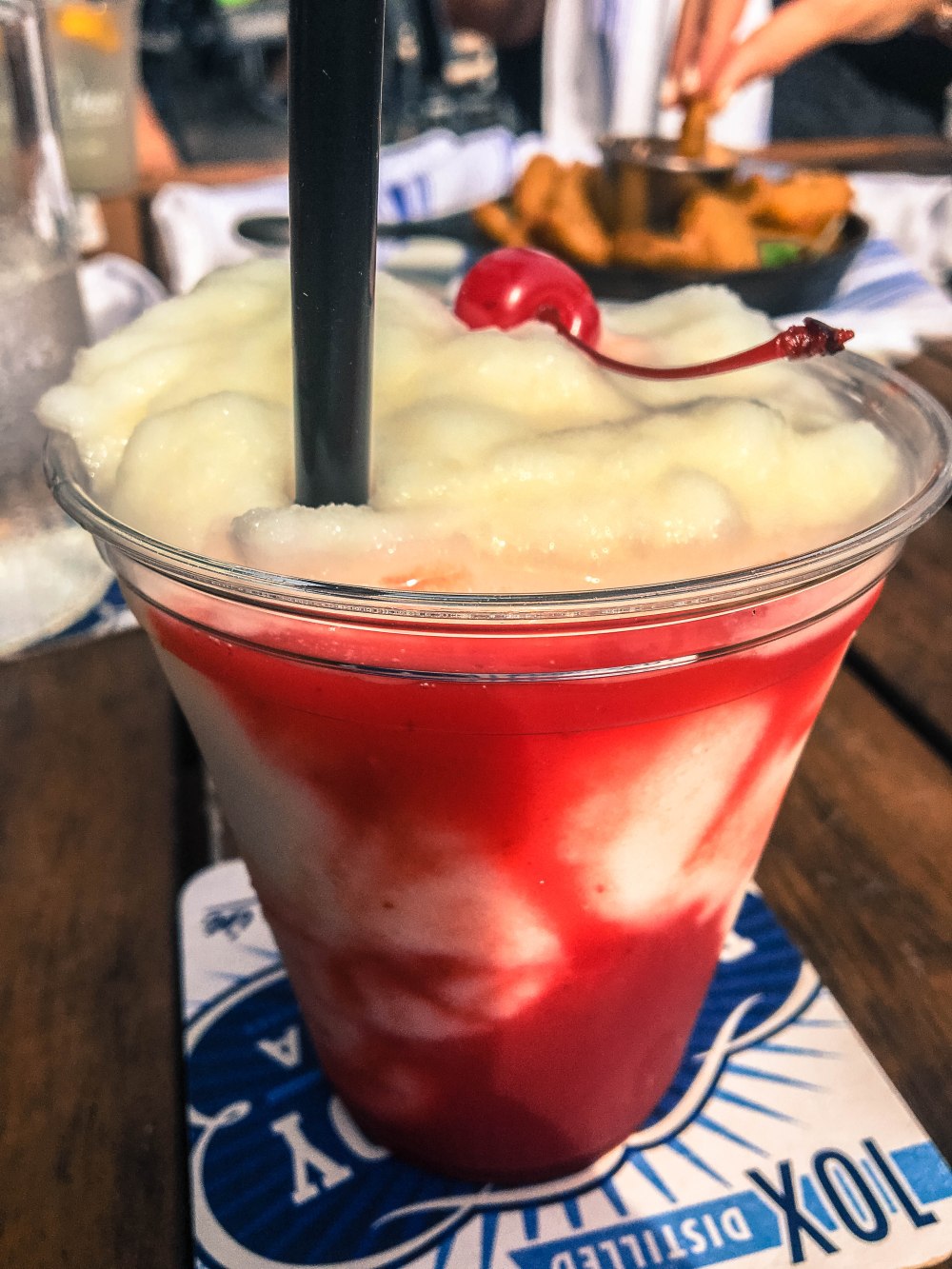 The above drink is a Miami Vice – Pina Colada and Strawberry Daquari. I wouldn’t have ordered it in any other circumstance because it is a real pain in the ass for the bartenders to make, but their were hardly any other customers so I did it anyway. Some of that last sentence is true.

So, yep…we ate, drank, went to the beach and pool and just basically kicked it. Hilton Head really is a friendly place and a popular travel destination for fellow Ohioans. As I stated earlier, it’s not MTV’s Beach House (dating myself) but  it is not a day care center either.

A special thanks to Tim and Sharon for making this trip possible.