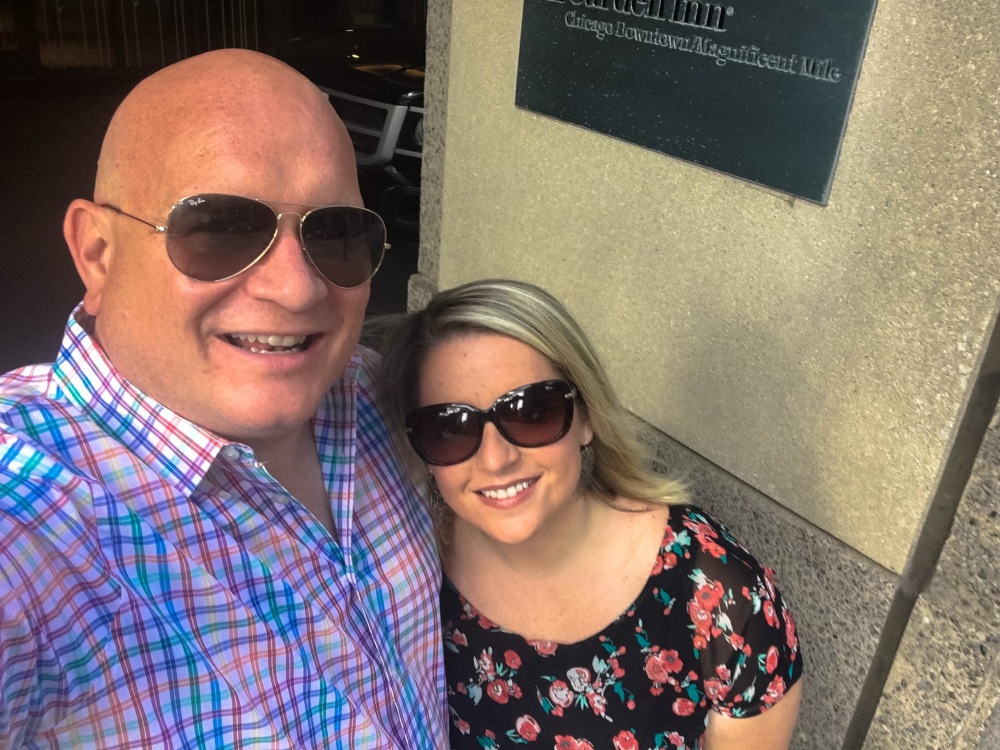 Travel time! Megan and I recently traveled to Chicago for a long, end of the summer weekend with emphasis on seeing a Bruno Mars show. We strayed away (mostly) from tourist traps, found some really cool spots and as always listened to the advice of bartenders. There is A LOT information and a ton of photos, so the trip will be split into three different entries. Before we get started, I have two essential tips to make sure you get the most out of your travel experience:

Tip #1: Travel with someone you are compatible with.

Tip #2: Marry someone who travels for a living, accrues travel points and uses said points towards purchasing hotels and flights at a discount. If you are a pro, make sure your spouse is attractive, younger than you and the breadwinner in your household.

That is all there is to it – traveling is just that easy.

We arrived in Chicago around 9:45 am local time and Megan (who is more familiar with Chicago) already had a brunch location picked out. We went to Eleven City Diner, located in the South Loop neighborhood.

Eleven City Diner is an establishment that offers an all day breakfast menu as well as a lunch/dinner menu. The menu offers traditionally Hebrew items (challah, lox, latke, knish, matzoh ball soup) as well as traditional diner fare. Eleven also hosts an ice cream float/sundae bar and a candy store. Oy Vey, over the moon I was! 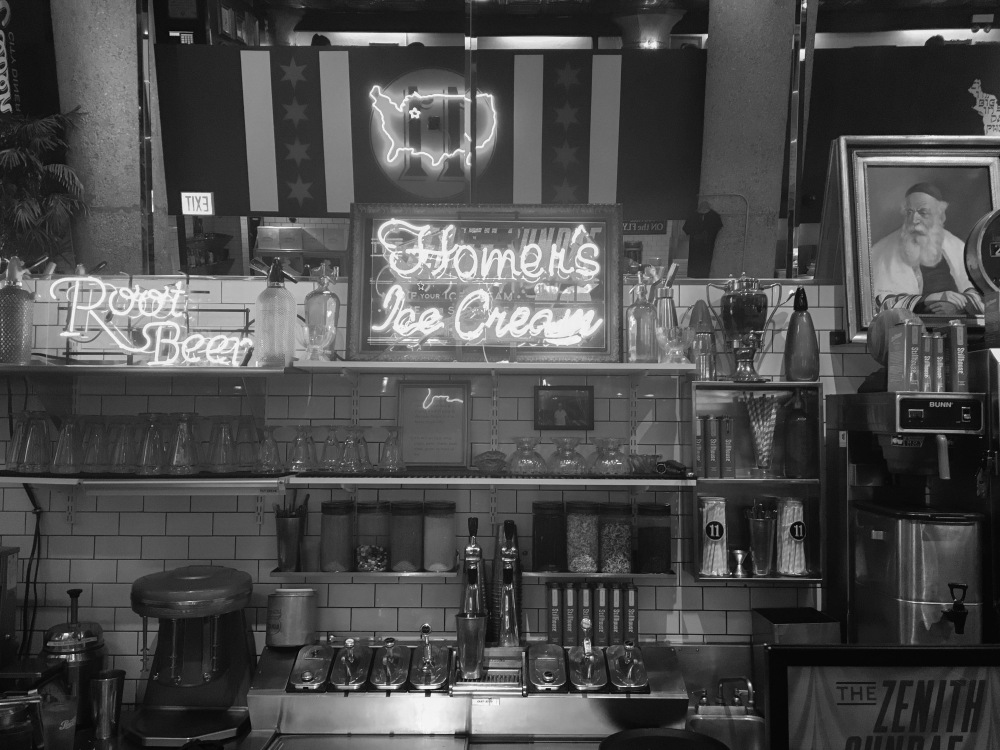 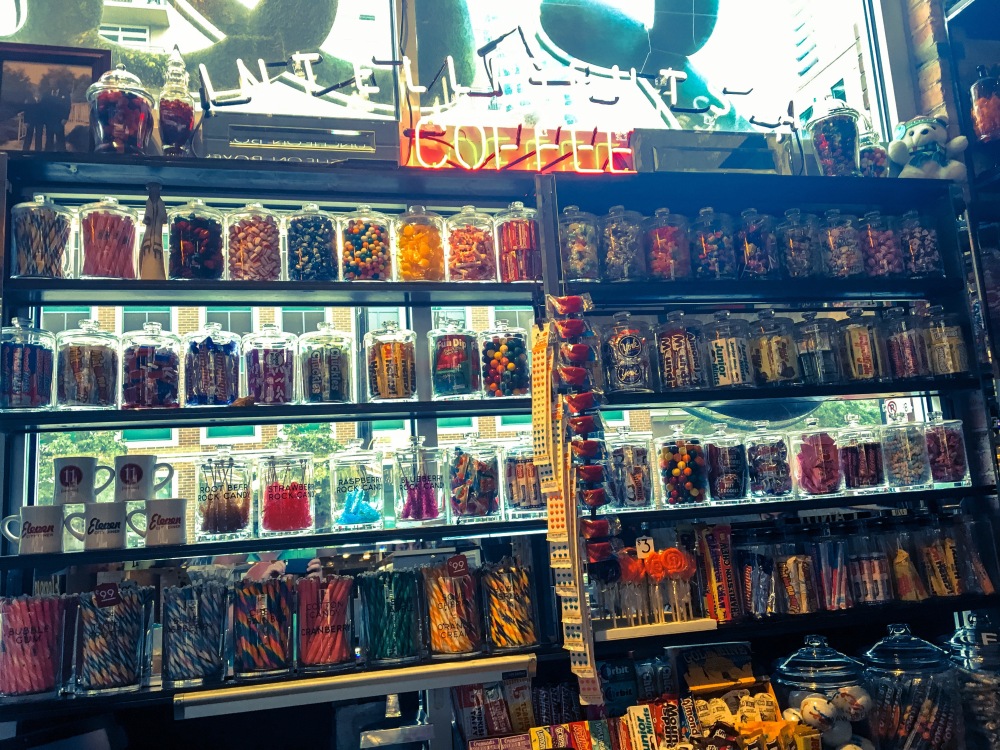 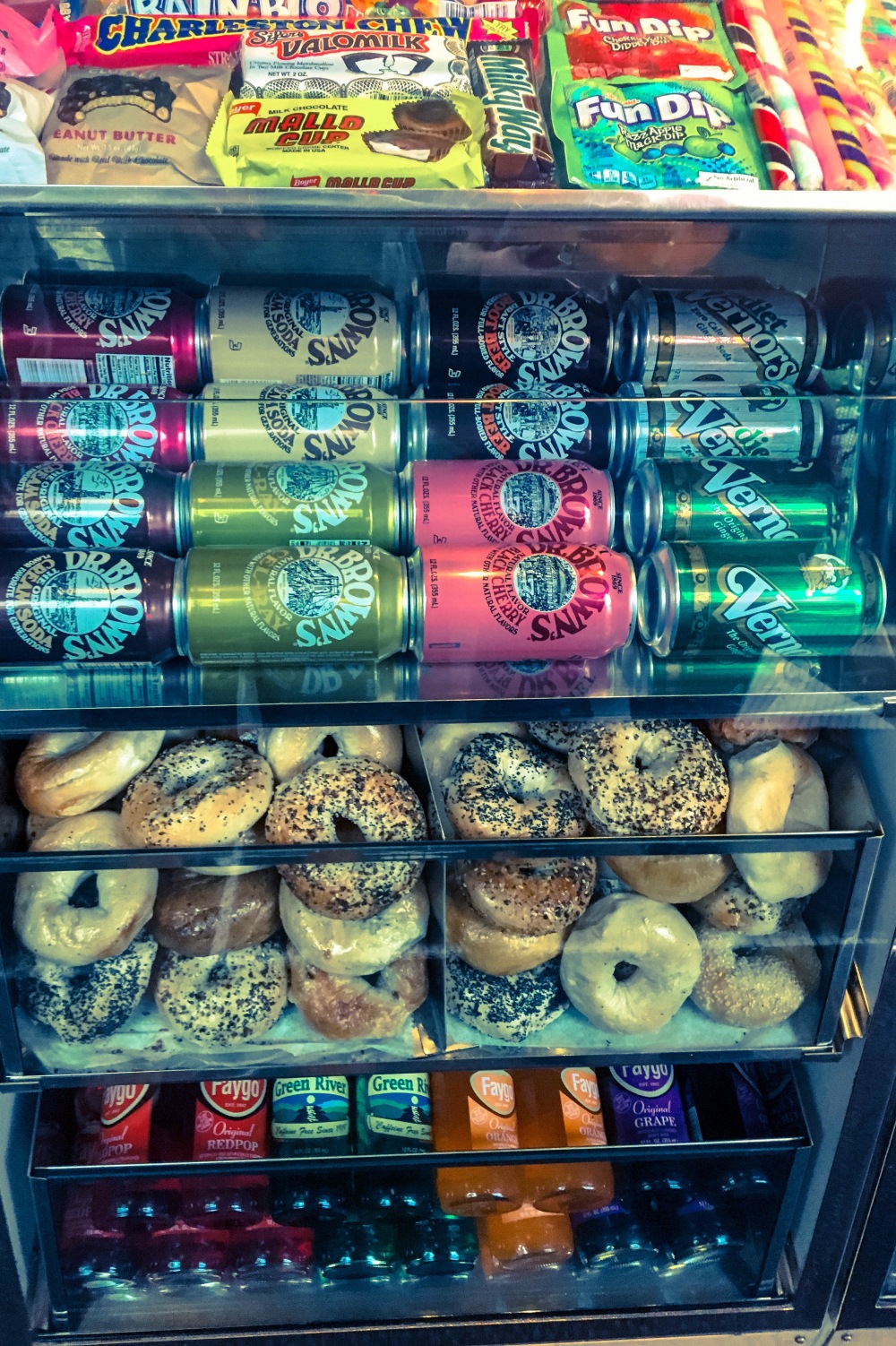 We were quickly seated and our server talked us into a Bloody Mary and a coffee (tough sell, I know). The Bloody Mary was rich and flavorful and came with olives, celery, cheese, salami and a lemon/lime combo. It was money well spent as you can tell in the photo below (I was hungry and at my meat and cheese before I took the photo. I don’t apologize). 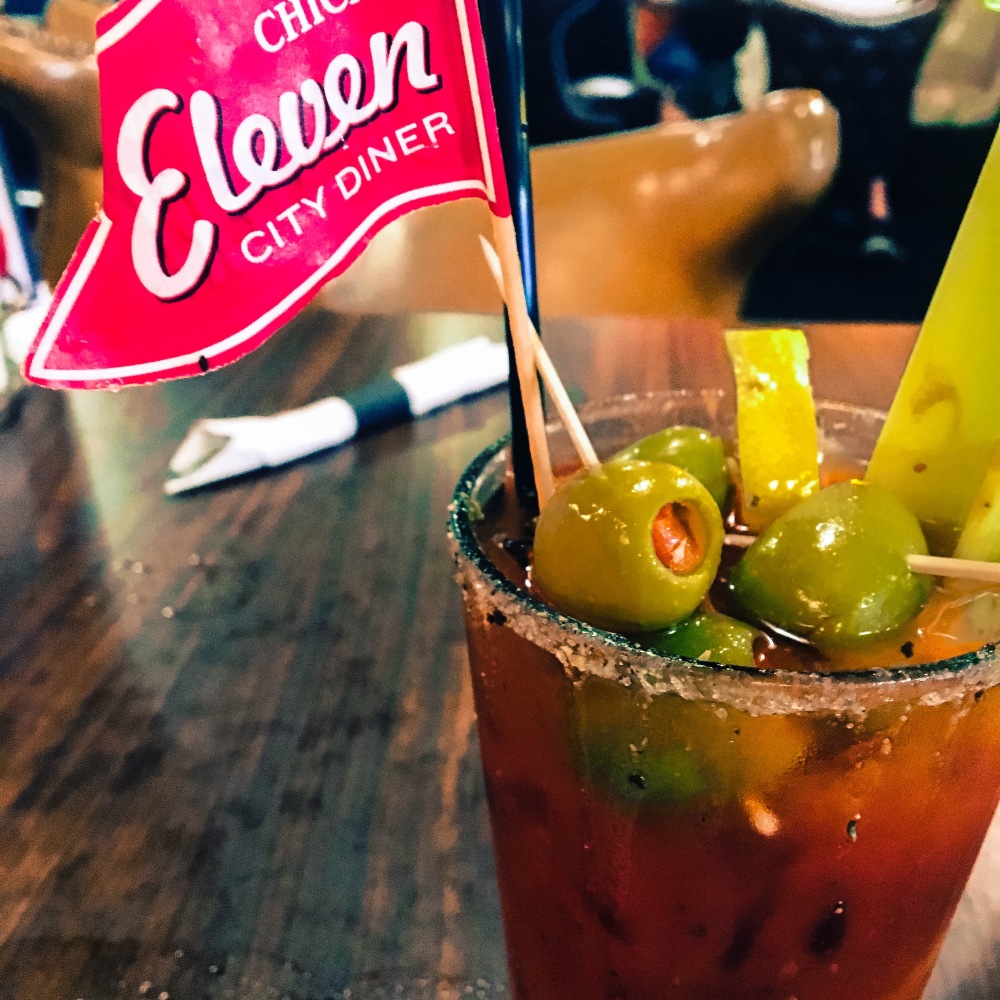 Megan went with a traditional breakfast of eggs, bacon and potatoes. Her bacon was juicy, the eggs were fluffy and potatoes had a crispy finish and a tender inside. 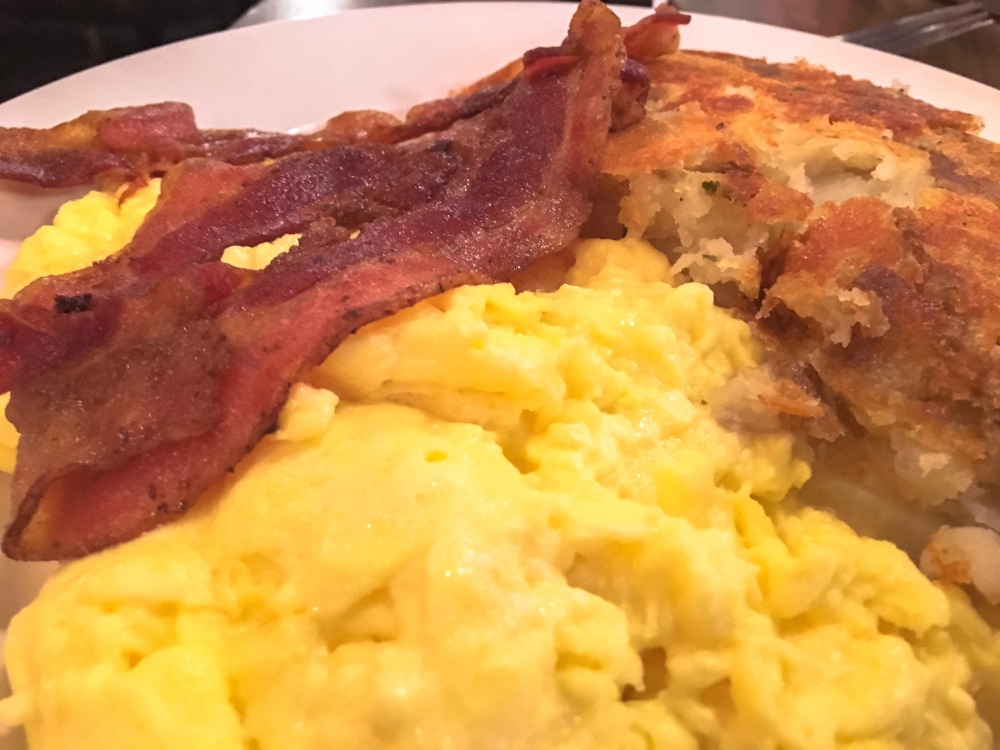 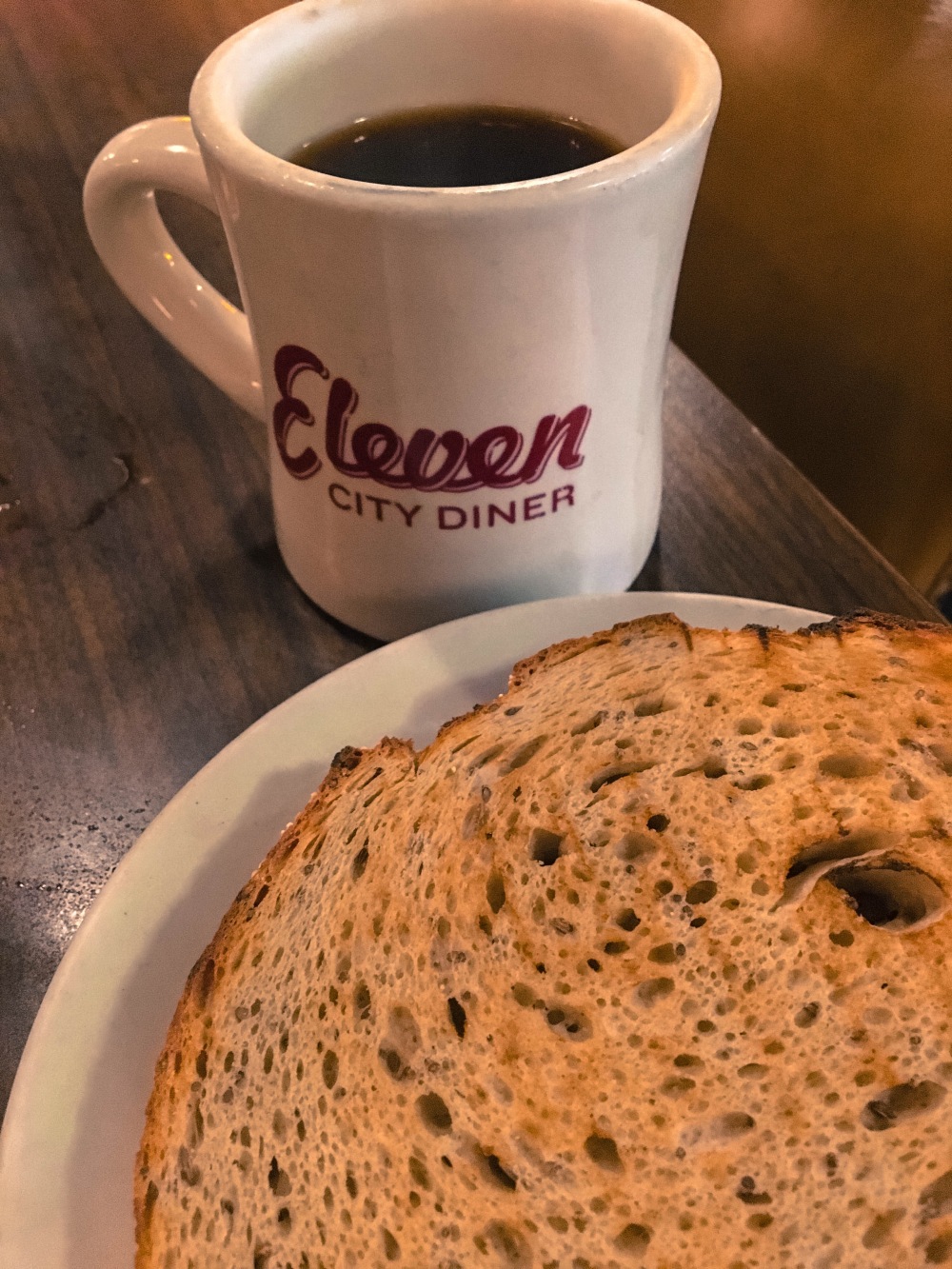 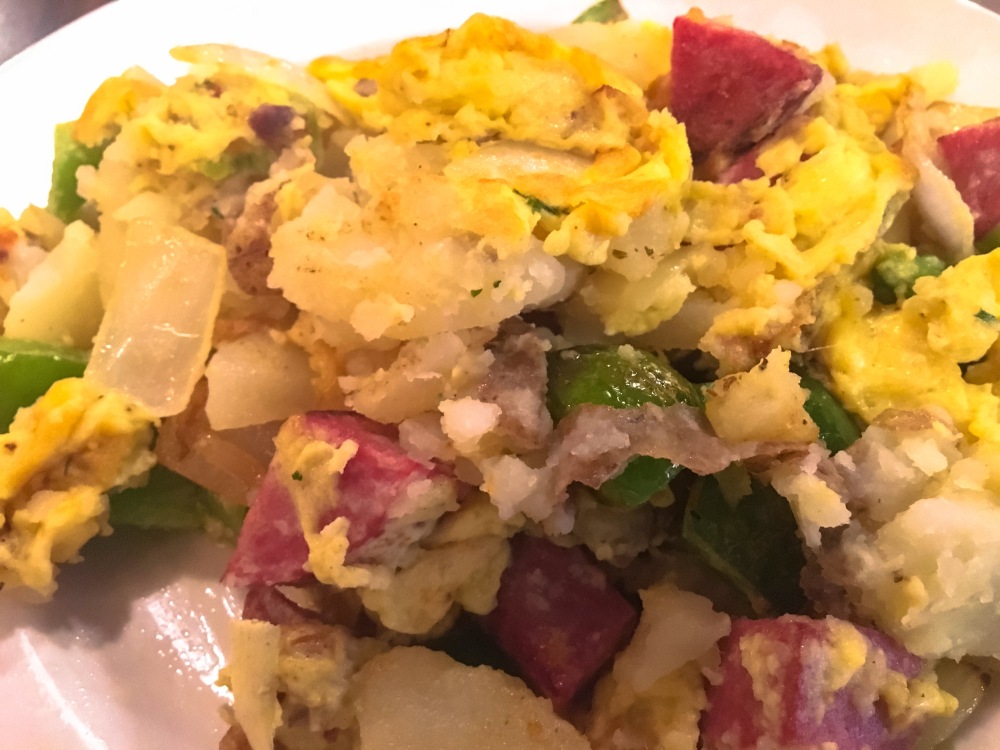 The Rye toast was fresh and the best part of my breakfast, which is not to say the scramble was bad, because it wasn’t. The reason I was not thrilled with my breakfast was because of operator error – I made the wrong choice and was not aware of the option I should have chosen until after we were done eating. 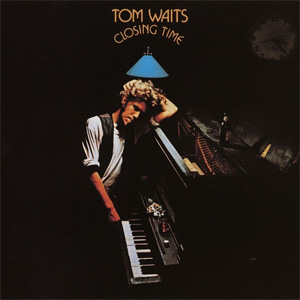 That is right, Eleven has a breakfast named after Tom Waits. Always choose Tom Waits. Damn it. At least I know what I am ordering on my next visit.

After breakfast, we took the long way back to our hotel and explored the city. Eventually we found ourselves here, where Megan had the privilege of having her photo taken in front of the second greatest Steakhouse in NBA history: 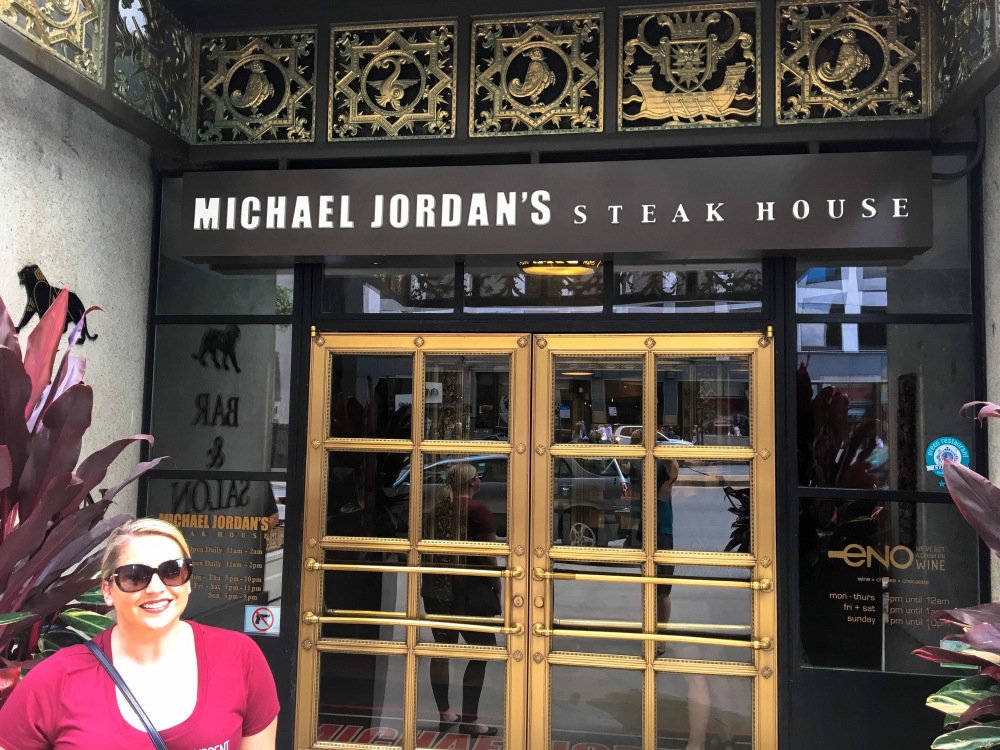 Our next stop was EATALY. EATALY is a huge grocery, wine shop and restaurant that sells all things Italian food and drink and the brainchild of celebrity chef Mario Batali. I thought it would be kind of cheesy, but I couldn’t have been more wrong. 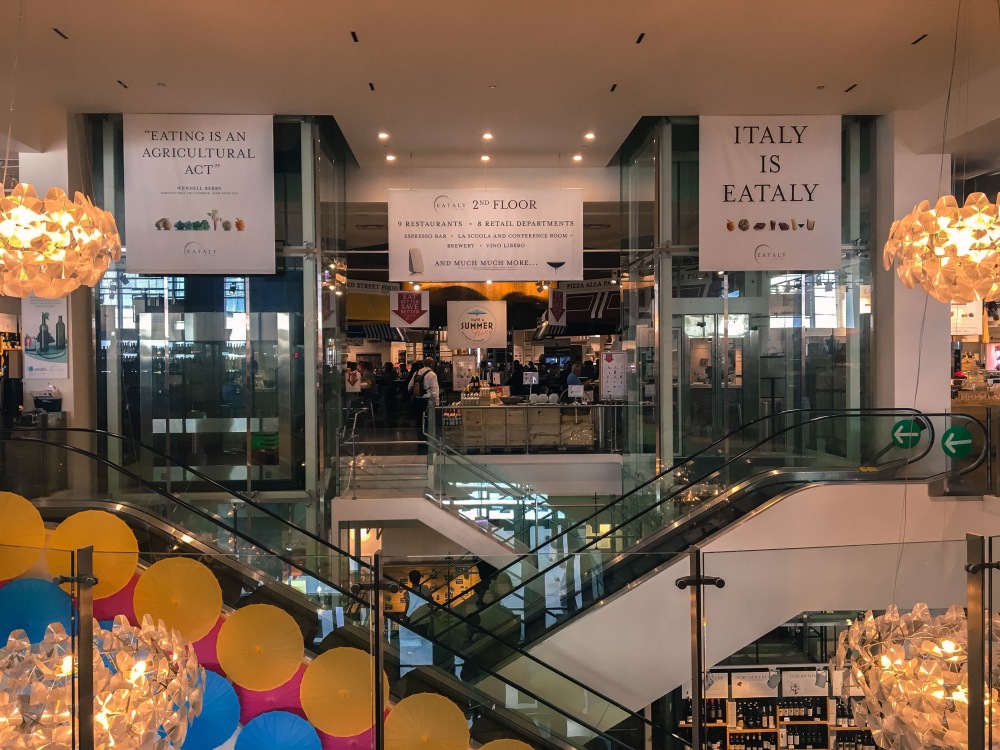 The restaurants, desserts and products available were amazing and the sheer number of options was overwhelming.

Here is a beautiful soda cooler, which contains many great carbonated and Italian drinks. 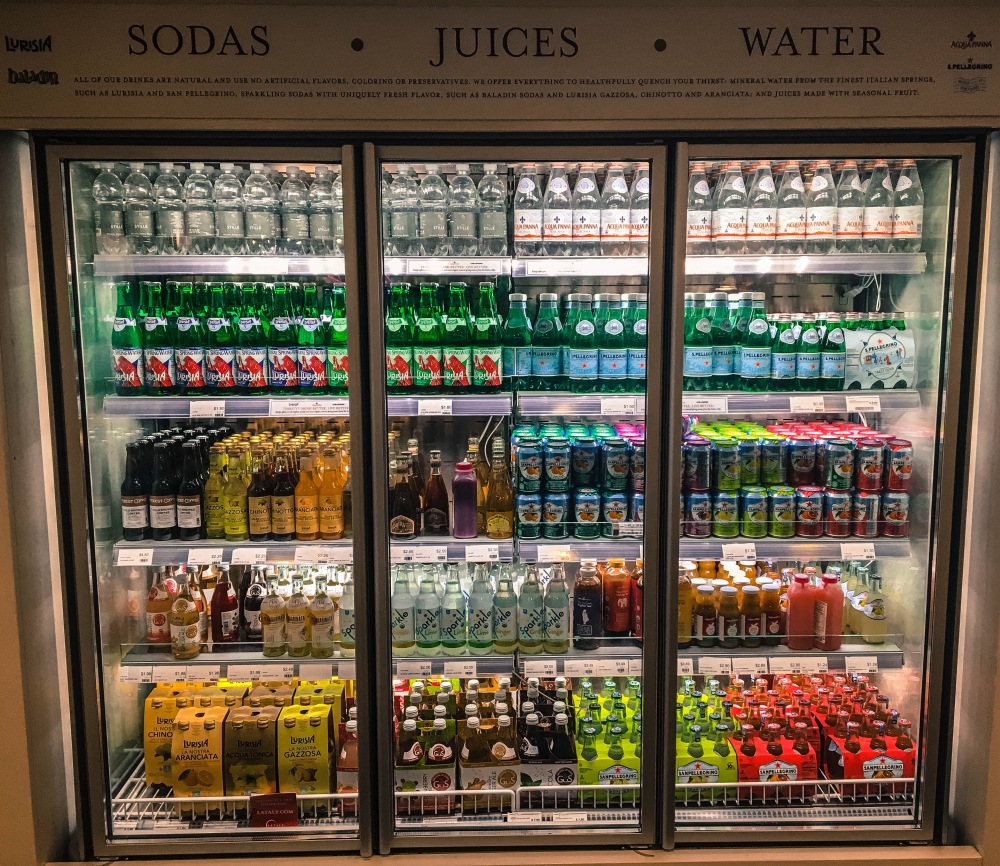 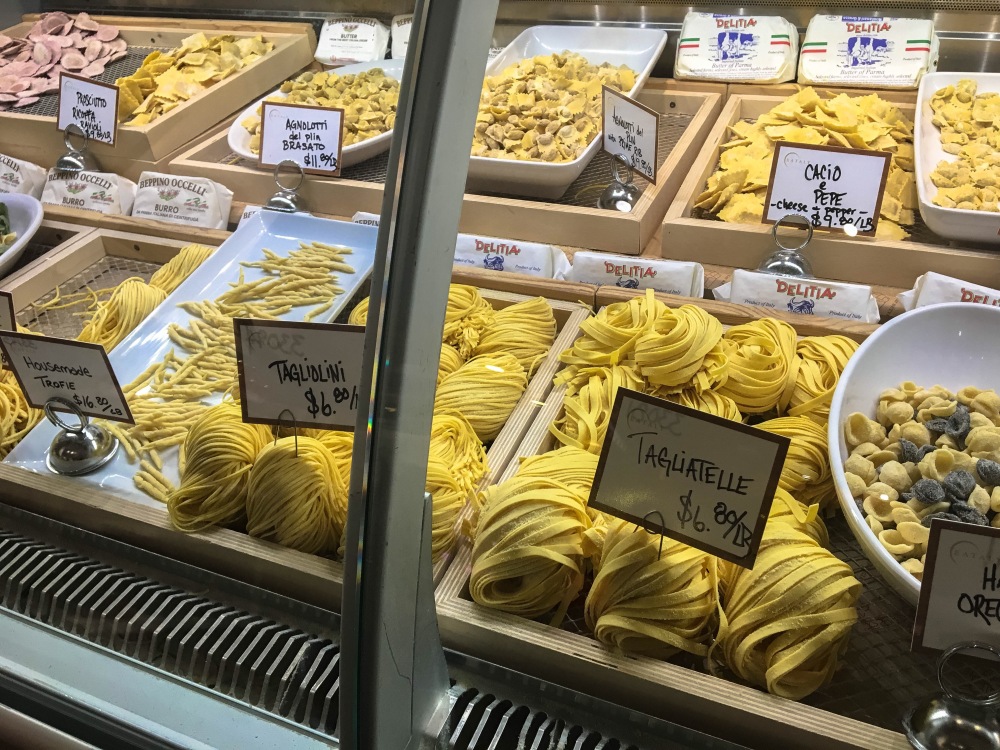 How did they know the octopus was Spanish? He could have been Portuguese – their languages are very similar. 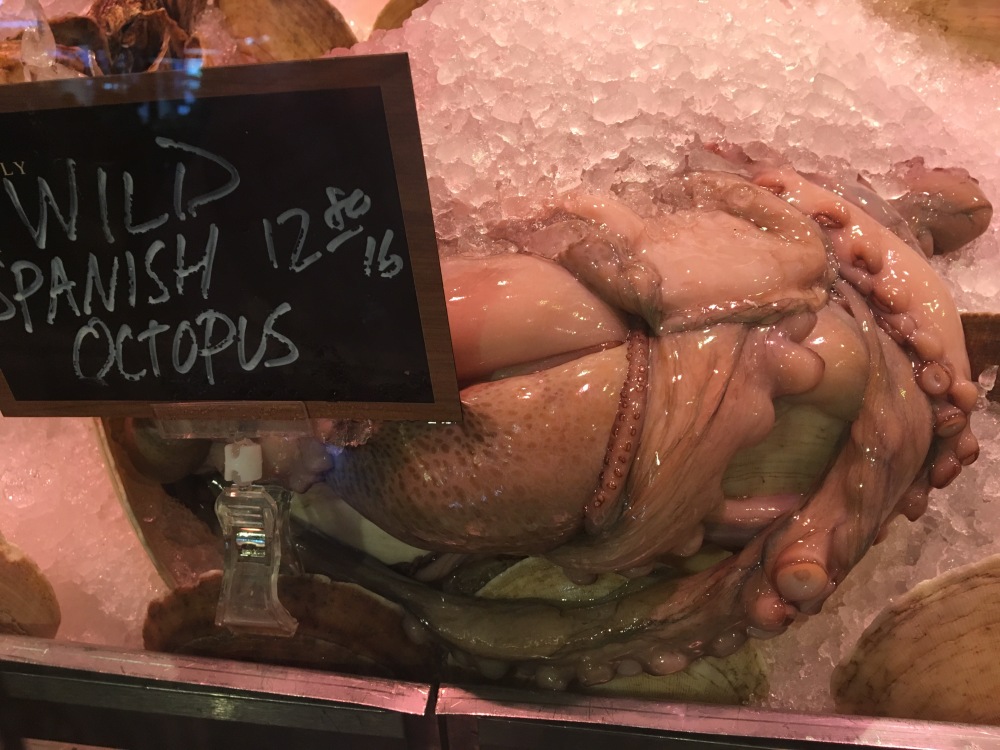 After EATALY, we walked up and down Illinois Street for an hour looking for a Record Store that no longer exists. That was a bummer, but we were able to get a feel for the neighborhood and our journey led us to Happy Hour at The Purple Pig. 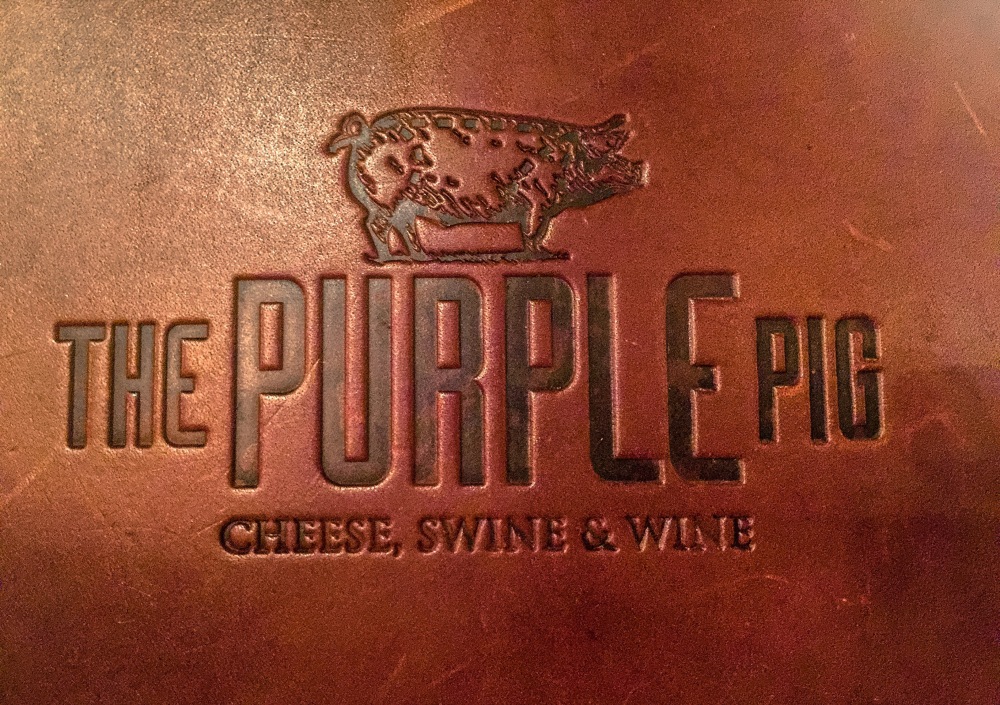 The Pig’s motto is ‘Cheese, Wine and Swine’ and this could not have been more appropriate. The Pig has a large patio and a very small indoor dining area. The mostly pork inspired menu is prepared DIRECTLY in view of the dining area. With the benefit of hindsight, I wish we would have tried an appetizer but we stuck to drinks. Megan had a refreshing house Pinot Grigio and I had The War Pigs IPA, which was made in collaboration with 3 Floyds Brewing Co. The Chicago Tribune has an excellent history and review here. The IPA was delicious, not available in Ohio, named in tribute to Black Sabbath and was my beer of choice for the rest of the weekend.

After Happy Hour, it was time to go back to the hotel and get ready for dinner at Gibson’s Steakhouse. Neither Megan or I had been there, but I made a reservation because it is often featured in the FX original program ‘The League’ and because it is a Steak House.

Gibson’s is an old school joint with an old school vibe. Dimly lit and classy, the wait staff wear dinner jackets,  have food runners and are true professionals. The patio was filled with younger people on Happy Hour and the inside was reserved for families, groups and couples.

From our back corner table, we ordered a bottle of  2014 Domaine Raspail-Ay Gigondas Rhone. This bottle has a great price point and opens up nicely with large tannins, light spice and smooth finish. 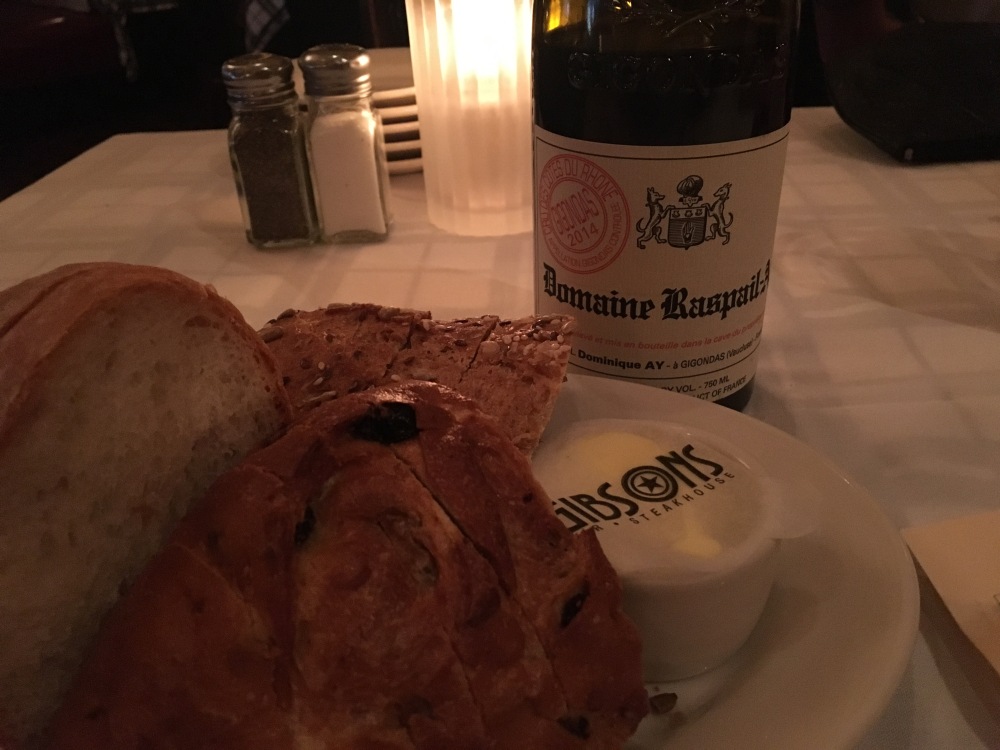 We decided to start with the Shrimp Cocktail. 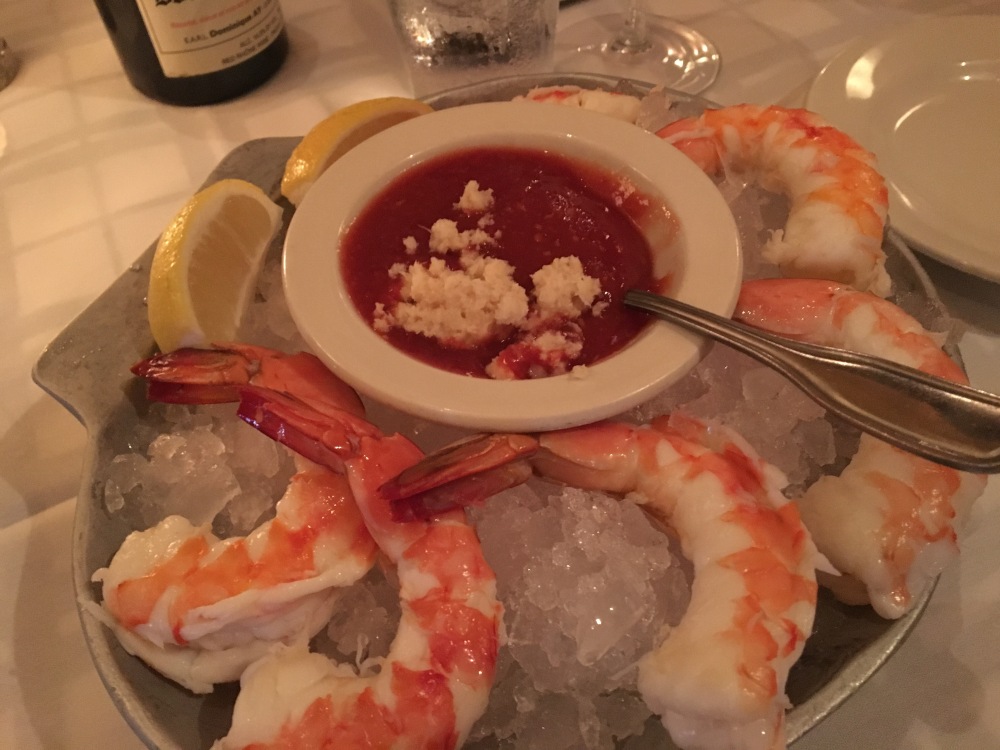 The shrimp were large, fresh and meaty and the cocktail sauce had the right amount of heat. I would have preferred the shrimp to be served in a cocktail glass, but that is just me. We would definitely order this appetizer again.

As with many Steakhouses, the a la carte sides are meant to be split. The Brussels Sprouts were hot and tender, served with bacon and came in a butter bourbon sauce. They were the perfect texture, had a rich and creamy flavor and made a case for dinner MVP. 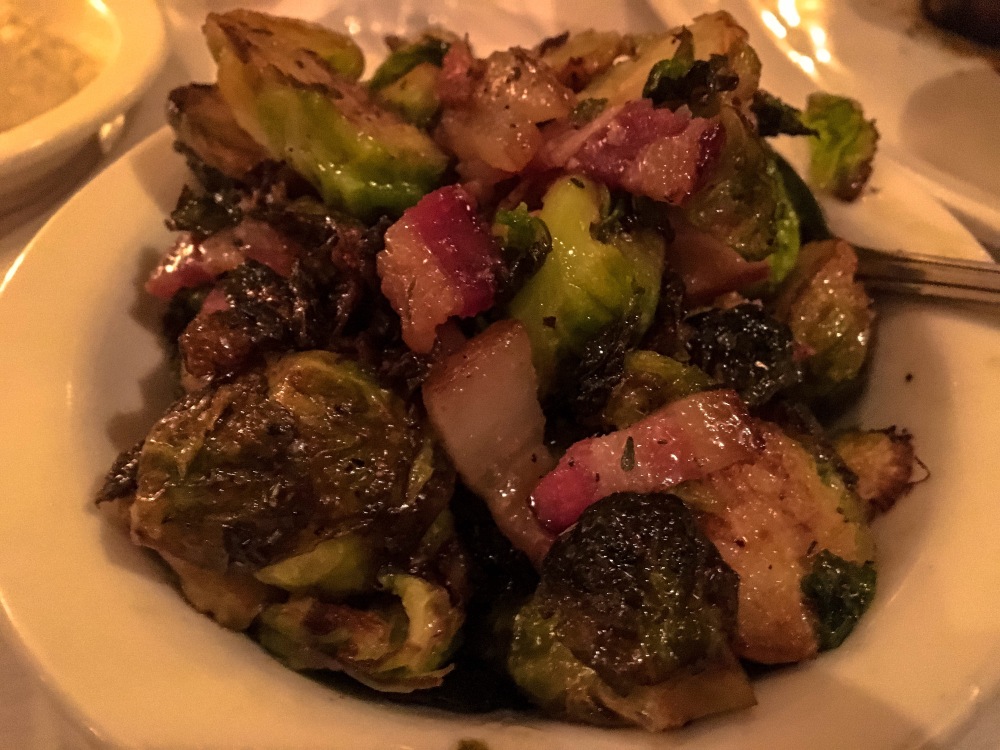 Megan decided on the small filet, medium rare. Her cut was of great quality and taste, but unfortunately served closer to medium. Also, we did not get a photo of this so you will have to take my word for it.

I chose the Prime Rib. 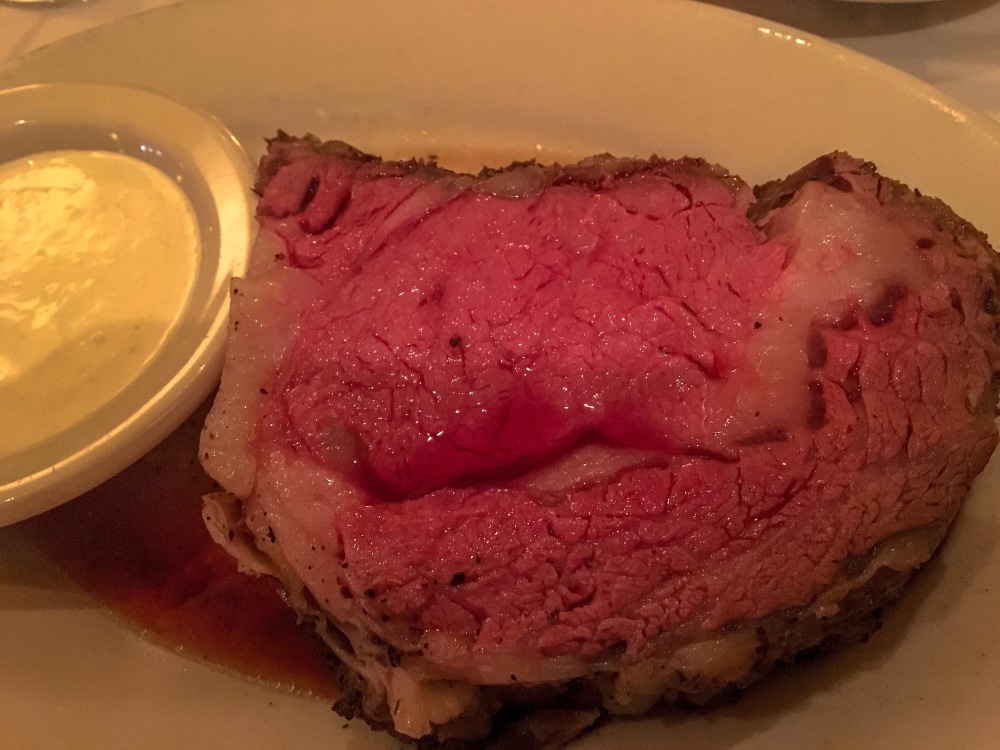 It was a perfect medium rare and came with a spicy and flavorful horseradish. I would order this dish again in a heartbeat and recommend it to anyone trying Gibson’s for the first time.

Overall, we were sold on Gibson’s. The clincher for me was ordering a coffee and Bailey’s after dinner. I know you are asking, ‘What is the big deal’? The big deal is that I ordered the drink without any accouterments and in a plain coffee cup – which is exactly how it was served. 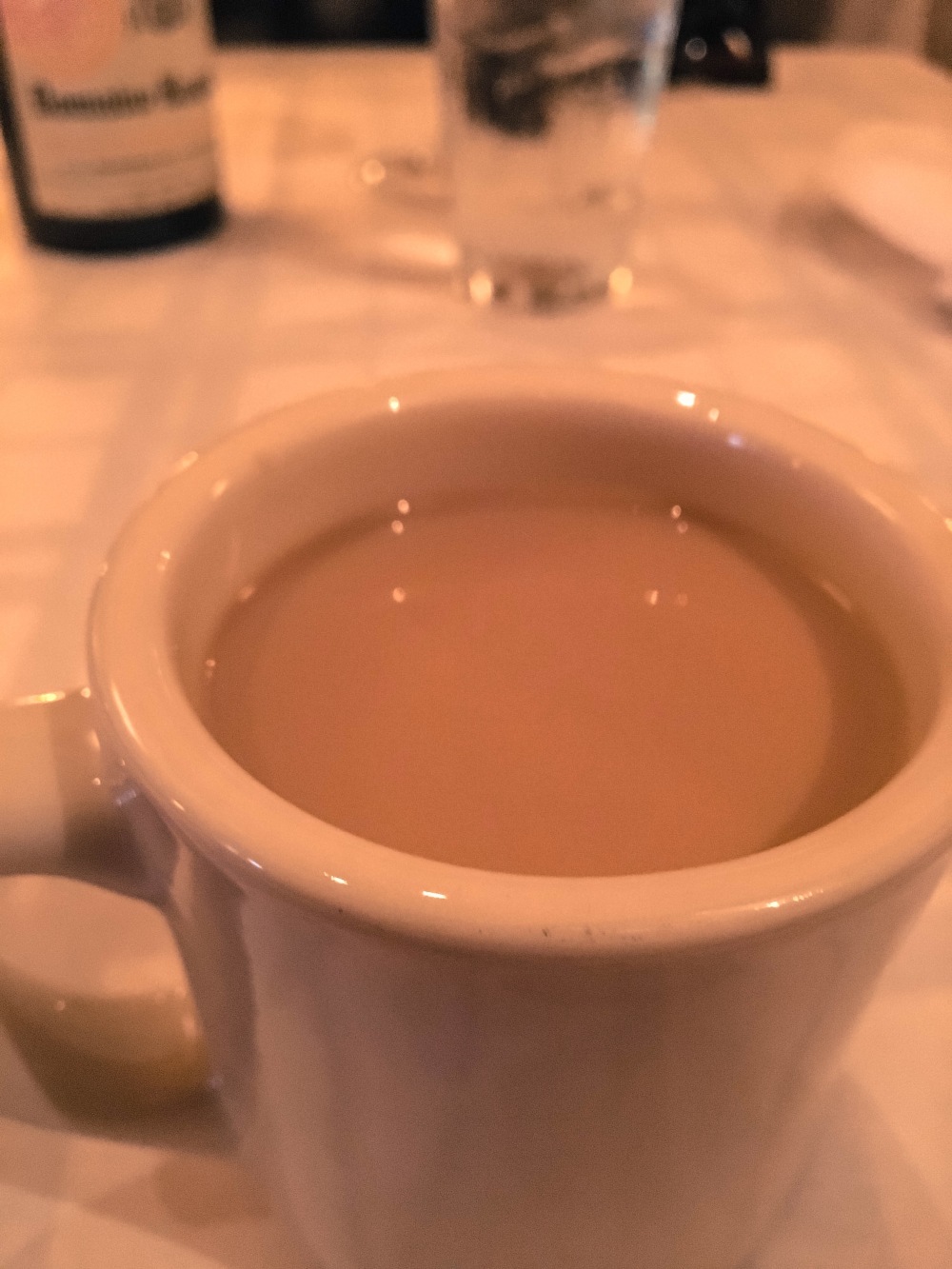 Coffee with Bailey’s. No whip cream, no sprinkles and no fancy glass. Gibson’s was the first steakhouse I had been to that did not try to impress and that got this simple order correct.

After walking all day and a big meal, we were pretty exhausted and stopped for a night-cap at The Tavern on Rush. I ordered a standard Manhattan and Megan chose the The Tavern Negroni -Tanqueray Gin, Campari, Pineapple Juice and lemon. Both drinks were delicious and expertly crafted. 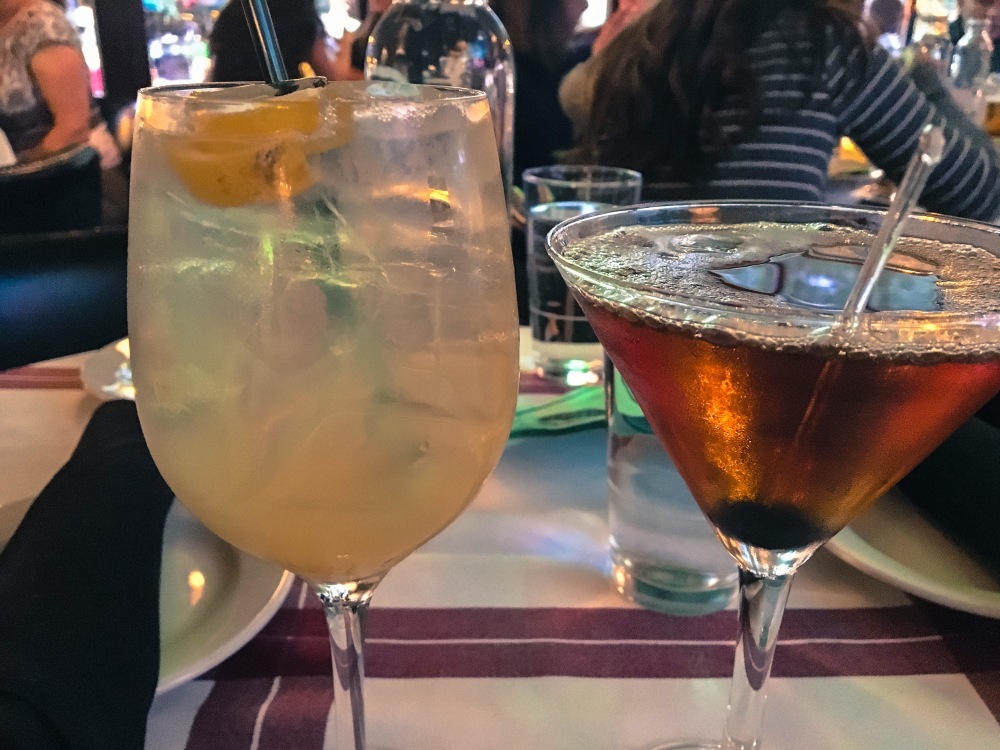 This place was very hip and I may have been the oldest person in attendance. We enjoyed watching the millennials argue about where the night was taking them against the juxtaposition of our night taking us back to the hotel to get a good night of sleep.

Please tune into the next Chicago entry. It will be second of three entries and detail the Bruno Mars show! As always, thanks for reading and PLEASE subscribe!