I believe the title of this blog is appropriate because you are asking yourself, ‘who is this jerk writing this blog’? The answer is a regular guy who likes to cook, listen to music, and watch and discuss great television. For this blog entry, we are going to pair Mad Men with Leon Bridges’ Coming Home and make an early 1960’s New York style supper club dinner.

The photo featured above is from Mad Men season 3 episode 11. The episode it titled, ‘The Gypsy and The Hobo’. In this episode, Betty finally confronts Don about his past. This confrontation happens on Beggar’s Night, the one night a year when everyone is in disguise. There is no subtlety about this reveal happening on this particular night.

After a long conversation, the Drapers take their children trick or treating. As the Drapers arrive on their neighbor Carlton’s porch, Carlton asks the children, ‘And who are you supposed to be?’ The episode ends after this scene, which is appropriate because after all…who is Don supposed to be?

I once had a friend aptly describe Mad Men as ‘the closest thing to a novel that has ever been on television’. The characters are complex, the show takes place in a different era, every detail is important, and the plot is a slow burn with big pay offs. The creator of the show, Matt Weiner, was a writer and executive producer for The Sopranos, meaning he worked closely with The Soprano’s creator and show runner David Chase. Perhaps that is why Mad Men is so good – it seems like a spiritual cousin to The Sopranos and deals with many of the same themes and issues.

For those not familiar with the show, here is my synopsis: Don Draper is the protagonist and an advertising superstar who works for the Madison Avenue firm Sterling Cooper.  He is a hard drinking womanizer with a mysterious past and a penchant for Canadian Club, brunettes, and self destruction. As the show progresses, more of Don’s past is revealed. The revealing is a vehicle for explaining his poor life choices and to make the viewer more sympathetic towards Don’s philandering, drinking, and absentee parenting. This works more often than not, and as a result it is difficult, but not impossible, to root against Don

Don works with Peggy Olson and is her mentor. Peggy comes from a Irish Catholic, blue collar Brooklyn family and claws her way up the corporate ladder of the advertising world. Along with Joan Halloway – office manager of the constantly changing Sterling Cooper -Peggy symbolizes the Women’s Rights movement of the 1950s and 1960s. These two women are the characters I found myself rooting for the most. Like all other characters on the show, Joan and Peggy had their flaws, but had to work twice as hard as their male counterparts, often only to receive half the recognition.

A character who becomes intertwined with Peggy and is a constant thorn in Joan’s side is Pete Campbell. Pete is a tried and true, blue blooded New Yorker. He is the son of privilege, but takes pride in his work and often keeps the Sterling Cooper afloat through his business acumen and hard work. Pete, however, has a dark side and an ambiguous morality – both of which are often on display. This ambiguity can, at times, be an asset to Pete in his daily workplace battles.

The final main character is my favorite character in the show and in my top five of favorite television characters all time: Roger H. Sterling, Jr. Roger inherited the business from his father and has only one job – keeping the people at Lucky Strike happy. Roger is also a blue blooded man child of privilege, a proud veteran of the second World War, and doting and thoughtful father. Of all of the characters on the show, Roger is the most witty and charming, but also the most hedonistic. It seems no vice too illicit, too married, or too mind altering for Roger’s indulgence.

Weiner takes the viewer on a tour of New York City and (towards the end of the show) Los Angeles in the 1960’s. Over the course of the series, many social topics and historic events (The Cuban Missile Crisis, the war in Vietnam, and Race Riots) are discussed and portrayed. Adding to the authenticity of the series is the fact that the assassinations of Martin Luther King, John Kennedy, and Robert Kennedy each get their own episode.

Mad Men is definitely a favorite of mine. In fact, I think it marks the true beginning of television’s second Golden Age – at least when it comes to basic cable or streaming services. The true pioneers of the second Golden Age were the HBO shows The Larry Sanders Show and The Sopranos, but that is a topic for another day. If you haven’t checked out Mad Men, do yourself a favor and make that a priority. If you already are familiar, do yourself a favor and re-watch ‘The Gypsy and The Hobo’.

The album I have paired with Mad Men is Leon Bridges’ 2015 release Coming Home. I drank the Manhattan in front of the LP. In fact, in true Don and Roger style, I had a few drinks that evening. It is also worth noting that I bought this album at Records Per Minute. If you stop in, Steve will be behind the counter and will be happy to answer any of your questions.

This album is a natural fit for this menu. If you close your eyes and listen, you can confuse Leon Bridges and Sam Cooke – well, at least as much as any mortal human could ever be confused with Sam Cooke. This album could have been playing in the background of any Mad Men episode, and the viewer wouldn’t have blinked an ear. If Leon Bridges was 50 years older, it is easy to imagine this album being recorded in Detroit.

Coming Home seamlessly blends Gospel, R&B, Soul, and Blues into an album that can be listened to many times over. ‘River’ and ‘Lisa Sawyer’ are straight out of the southern Gospel playbook. If you told me these songs were written by a Winans or Houston family member, I would have easily believed you.

‘Better Man’, ‘Smooth Sailin’, and ‘Flowers’ will put you on the dance floor, if  you are jonesing for a slow jam, ‘Pull Away’ will give you your fix, and ‘Twistin’ and Groovin’ is a tutorial in traditional 12 bar blues. This album has something for everyone – and when I say everyone, I mean EVERYONE.

To close out the Leon Bridges topic and in the spirit of full disclosure, Megan and I picked ‘Coming Home’ for our first dance at our wedding.  Here is a photo of Megan and I after dancing to ‘Coming Home’:

I am sweaty and drinking a glass of bourbon and she is calm, cool, collected, and captivating. I am glad we picked Leon Bridges, it was a good fit for us. We were also lucky enough to have this song covered by The Heidi Burson Band. Located out of Nashville, Heidi and her band tour nationally. If you are lucky enough for them to play your town, do yourself a favor and go see them live.

Alright, now it is time to make dinner. For the appetizer, we are going to make Coquilles St. Jacque. I was unfamiliar with this dish until I tried it at Windward Passage in Upper Arlington, OH. Windward Passage also fits into this entry because nothing has changed there is 50 years – and I mean that in a good way. There is an obvious nautical theme and the restaurant is dimly lit with wood paneling. In real life and at real ages, Sally Draper would be to young to be a regular here, but it would not be difficult to imagine an 83 year old Pete Campbell at the bar enjoying a drink.

This dish is mashed potatoes topped with scallops and covered in cheese, or at least my version is. I paired this with a dirty vodka martini. I liked the combination and felt sophisticated and it was easy to make. Here are the recipes:

We are going to keep everything simple in this blog, including the drinks. Why? Because you want your bartender to look like this: 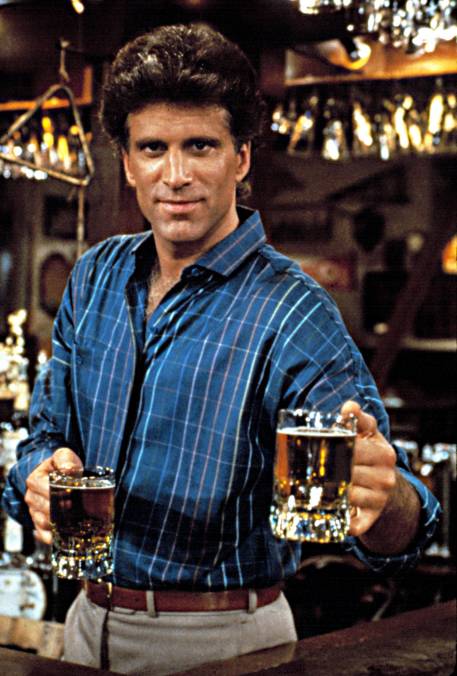 If your bartender/mixologist does look like this, I am sure he is a wonderful person and makes fine drinks, but is just not the right fit for this specific blog. We will not be adding Elderflower to any of our drinks, but rest assured we will be enjoying some delicious craft beers. 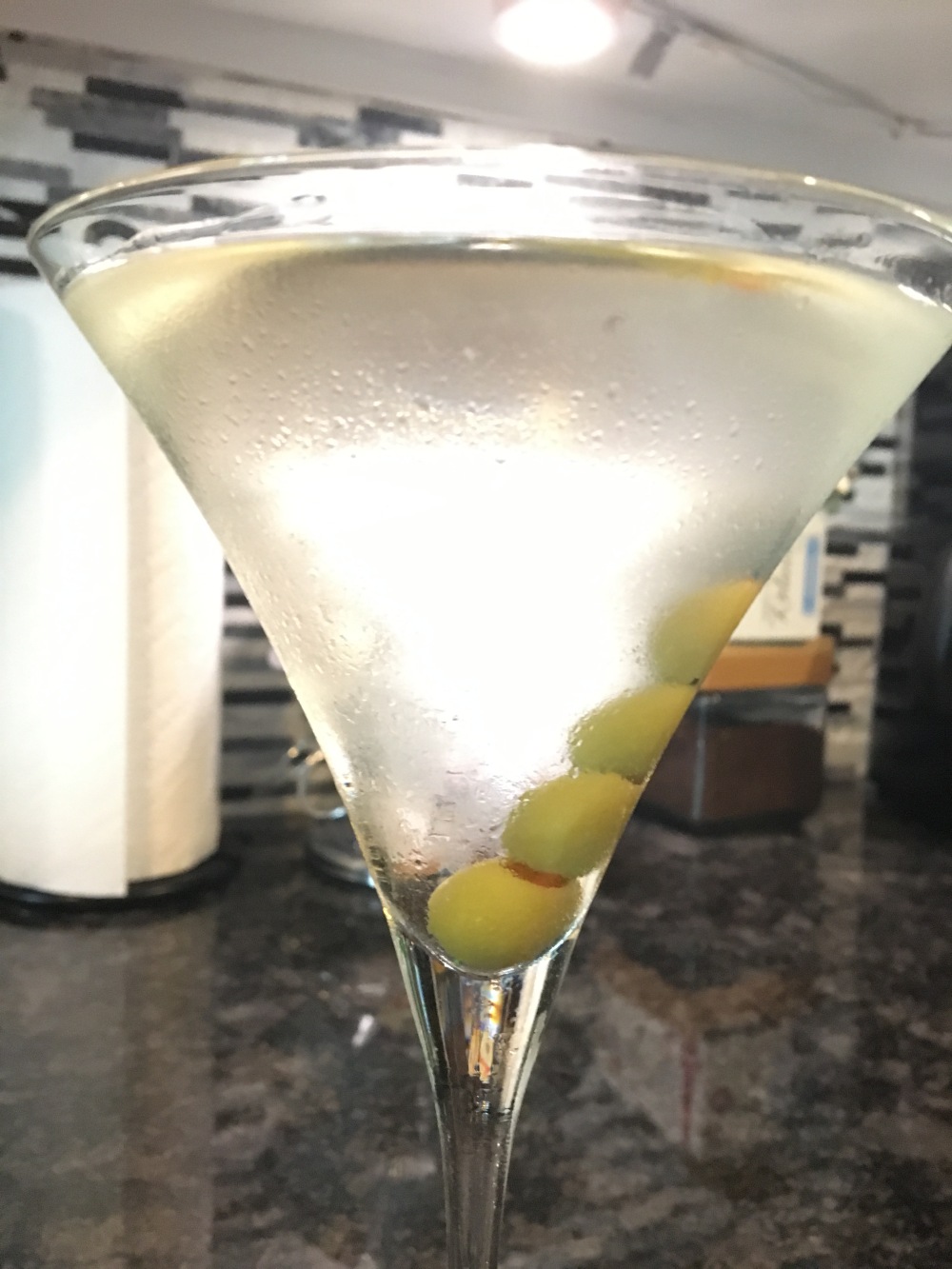 Now we move onto the main course:

Caprese Salad with Corn and Asparagus 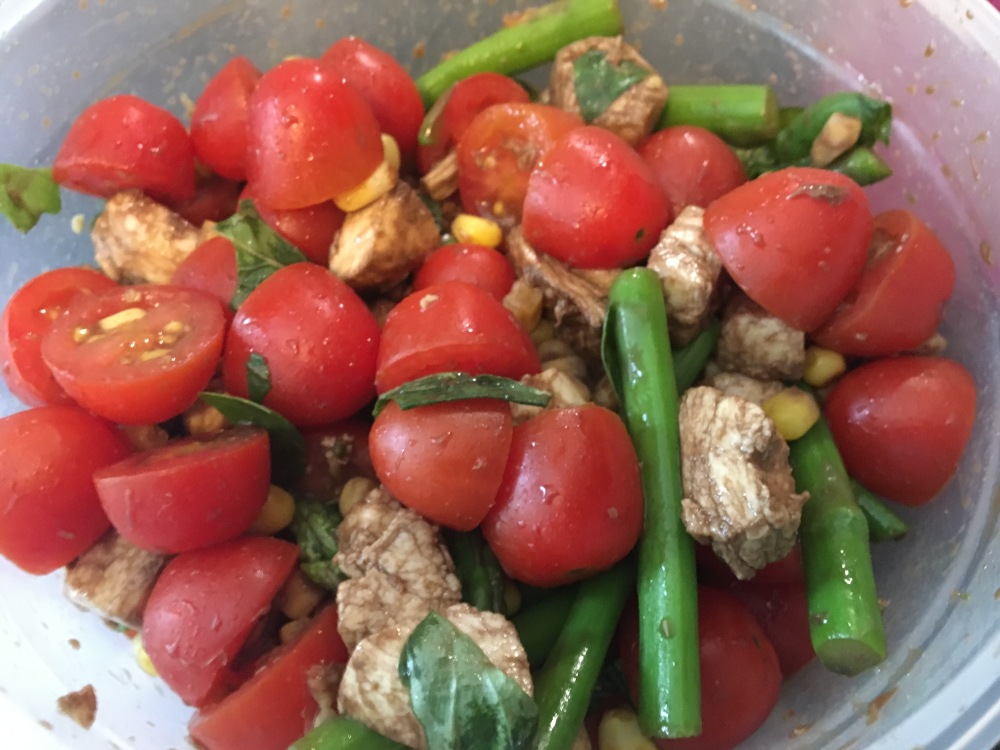 I failed to get a photo from a different angle, but you can see the char marks on the steak. Always try to aim for that by flipping as little as possible. I also believe in letting a good piece of steak speak for itself and not adding much to the process. Some people like to add different marinades, but I subscribe to the salt, pepper, and olive oil doctrine. 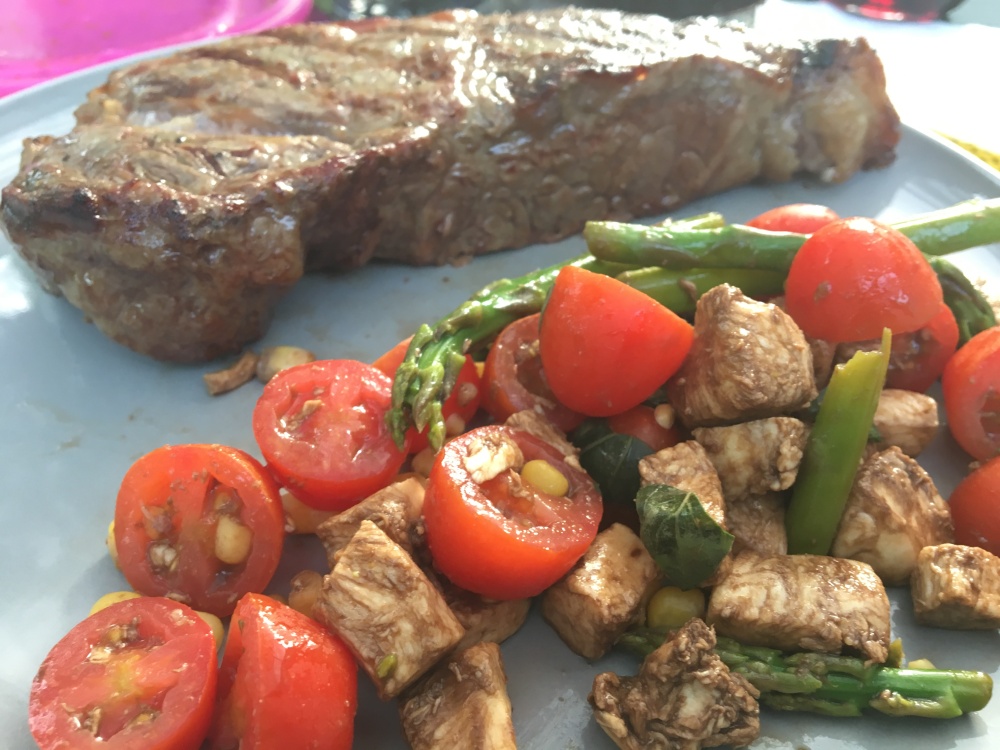 At this point I partook in a Pinot Noir from Oregon to pair with dinner. Pinots from Oregon are currently all the rage, pair nicely with anything, and are great on a warm summer night. If you have time, pour your bottle into a decanter for 20 minutes or so before drinking – it can make a big difference. You wont go to purgatory if you don’t though, so it is win-win.

Alright! Here we are – dinner is over and it is time to unwind and watch some Mad Men. In honor of Don Draper and Windward Passage, we are going to make a Manhattan.

Mad Manhattan – In honor of Don and all of the other high functioning alcoholics in the Sterling Cooper office.

You have already seen one version of this drink. Recently I made the same drink, but in a high ball glass. It is best to enjoy this drink in front of a photo of family and friends,

I think that should about do it for this entry. I hope you have enjoyed this 1960’s themed menu. At the end of my entries, I am going to have a section dedicated to random thoughts about the menu. Thanks for reading!